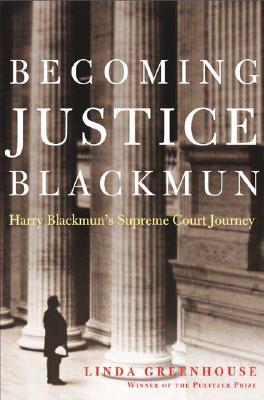 A Pulitzer Prize-winning correspondent with unprecedented access to the inner workings of the U.S. Supreme Court chronicles the personal transformation of a legendary justice

From 1970 to 1994, Justice Harry A. Blackmun (1908-1999) wrote numerous landmark Supreme Court decisions, including Roe v. Wade, and participated in the most contentious debates of his era-all behind closed doors. In Becoming Justice Blackmun, Linda Greenhouse of The New York Times draws back the curtain on America's most private branch of government and reveals the backstage story of the Supreme Court through the eyes and writings of this extraordinary justice.

Greenhouse was the first print reporter to have access to Blackmun's extensive archive and his private and public papers. From this trove she has crafted a compelling narrative of Blackmun's years on the Court, showing how he never lost sight of the human beings behind the legal cases and how he was not afraid to question his own views on such controversial issues as abortion, the death penalty, and sex discrimination. Greenhouse also tells the story of how Blackmun's lifelong friendship with Chief Justice Warren E. Burger withered in the crucible of life on the nation's highest court, revealing how political differences became personal, even for the country's most respected jurists.

Becoming Justice Blackmun, written by America's preeminent Supreme Court reporter, offers a rare and wonderfully vivid portrait of the nation's highest court, including insights into many of the current justices. It is a must-read for everyone who cares about the Court and its impact on our lives.

"At last, the mystery unveiled! The Supreme Court traditionally guards its privacy to the death, but Harry Blackmun, a supremely humane justice, left papers describing what the Court actually does behind the scenes, and Linda Greenhouse has used the Blackmun papers to write a fascinating book. Especially gripping is the intense human drama of the breakup of a lifelong friendship between Justice Blackmun and Chief Justice Warren Burger."
-Arthur Schlesinger, Jr.

"Anyone who wants to understand the inner workings of the U.S. Supreme Court and anyone who hopes to grasp the subtle ways that personal philosophy and psychology combine with the sometimes impersonal logic of the law to shape the outcomes of great legal battles, would do well to read Linda Greenhouse's unpretentious but powerful story of Harry Blackmun. Greenhouse, in a jewel fully worthy of her reputation as the best journalist ever to have covered the work of the Supreme Court, proves to be as able a biographer as she is a reporter. Becoming Justice Blackmun is a brilliant and penetrating study of how unsought challenge and controversy can, in the most modest of men, bring out a measure of true greatness."
-Laurence Tribe

"Harry Blackmun was the model public servant: hard-working, self-effacing, scrupulously honest, of a humorous bent, persnickety about language, ever re-examining his own thinking and dispositions, a patriot of process. Linda Greenhouse's elegant biography, a look at the professional life of the Justice in the blue Volkswagen, opens a window on the Court and on the antique notion of public service."
-Garrison Keillor


"This is a wonderful, a thrilling book. Linda Greenhouse has given us both the touching story of a man's transformation and a rare insight into the way the Supreme Court works. It is born a classic."
-Anthony Lewis

"I raced through Linda Greenhouse's book as soon as I got my hands on it. Becoming Justice Blackmun is both gripping constitutional history and rich personal drama. The nation's finest Supreme Court reporter has produced a vivid and fascinating portrait of a complex man."
-Jeffrey Toobin

Linda Greenhouse has covered the Supreme Court for "The New York Times" since 1978 and won a Pulitzer Prize in 1998 for her coverage of the Court. She appears regularly on the PBS program "Washington Week in Review" and lectures frequently on the Supreme Court at colleges and law schools. She graduated from Radcliffe College and holds a master of studies in law from Yale Law School.
Loading...
or
Not Currently Available for Direct Purchase