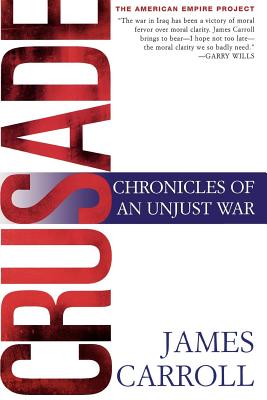 "The war in Iraq has been a victory of moral fervor over moral clarity. The first without the second is a curse on itself. James Carroll brings to bear-I hope not too late-the moral clarity we so badly need." -Garry Wills

With the words "this Crusade, this war on terror," George W. Bush defined the purpose of his presidency. And just as promptly, James Carroll-Boston Globe columnist, bestselling author, and respected moral authority-began a week-by-week argument with the administration. In powerful, passionate bulletins, Carroll dissected the President's exploitation of the nation's fears, invocations of a Christian mission, and efforts to overturn America's traditional relations-with other nations and its own citizens.

Combining clear moral consciousness, an acute sense of history, and a real-world grasp of the unforgiving demands of politics, Crusade is a compelling call for the rescue of America's noblest traditions.

“Devastating and deeply humanistic...James Carroll's critiques of our foreign policy offer a unique combination of historical knowledge and moral perspective. For people concerned about the mixture of religion, politics, and terrorism (our and theirs) in today's world, Carroll is the ultimate guide.” —Chalmers Johnson, author of The Sorrows of Empire

“The war in Iraq has been a victory of moral fervor over moral clarity. The first without the second is a curse on itself and others. James Carroll brings to bear-I hope not too late-the moral clarity we so badly need.” —Garry Wills

“This is the most compelling report and analysis that we've had yet of the Middle East conflict, specifically Iraq, and all in wonderfully readable style...Those who are uncomfortable about our commitment in Iraq as well as those who have made up their minds against it will find here both literate and compelling support.” —John Kenneth Galbraith

“In his remarkable memoir, An American Requiem, James Carroll established himself as an eloquent critic of the immorality and madness of the Vietnam War. In Crusade, he has wedded this moral clarity to a keen sense of both history and the enormous complexity of peacemaking. These passionate essays constitute a devastating critique of the folly fobbed off as 'realism' by the Bush administration in its ill-conceived 'War on Terror.'” —John Dower, author of Embracing Defeat, winner of the Pulitzer Prize

“At a time when political writing seems like a food fight between left and right, Jim Carroll writes from a vivid moral center. He questions power and warns of the folly of conflict. This collection offers a rare and courageous voice.” —Ellen Goodman

James Carroll is the bestselling author of the National Book Award-winning memoir An American Requiem; Constantine's Sword, a history of Christian anti-Semitism; and several novels. He lectures widely on war and peace, and on Jewish-Christian-Muslim reconciliation. He lives in Boston, Massachusetts.
or support indie stores by buying on