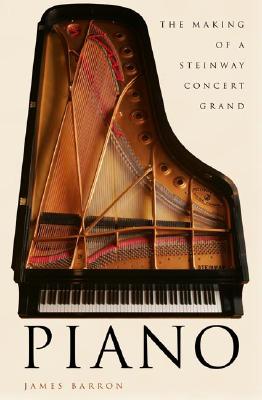 The Making of a Steinway Concert Grand

Like no other instrument, a grand piano melds engineering feats with the magical sounds of great music: the thunder of a full-throated bass, the bright, delicate trill of the upper treble. Alone among the big piano companies, Steinway still crafts all of its pianos largely by hand, imbuing each one with the promise and burden of its brand.

In this captivating narrative, James Barron of The New York Times tells the story of one Steinway piano, from raw lumber to finished instrument. Barron follows that brand-new piano--known by its number, K0862--on its eleven-month journey through the Steinway factory, where time-honored manufacturing methods vie with modern-day industrial efficiency. He looks over the shoulders of men and women--some second- and third-generation employees, some recently arrived immigrants--who transform wood and steel into a concert grand. Together, they carry on the traditions begun more than 150 years ago by the immigrants who founded Steinway & Sons--a family that soared to prominence in the music world and, for a while, in New York City's political and economic life. Barron also explores the art and science of developing a piano's timbre and character before its first performance, when the essential question will be answered: Does K0862 live up to the Steinway legend?

From start to finish, Piano will charm and enlighten music lovers.


Praise For Piano: The Making of a Steinway Concert Grand…

"This engaging narrative about the preservation of a great tradition by skilled craftsmen is the work of a writer who is quite a skilled craftsman himself. James Barron, an indefatigable reporter, has woven out of his scrupulous research a fascinating story of an all but vanished art, and of the men who created it."--two-time Pulitzer Prize winner Robert A. Caro "How has Steinway come to be the gold standard for the piano maker's art? In this engaging book, James Barron tells the story, taking us behind the scenes in the New York factory to explore the complex interplay of science, tradition, and skill during the eleven months it takes to build a concert grand. What emerges is a succinct and captivating account of the craft that produces this supremely subtle instrument that dominates the world's concert halls. Fascinating, informative, and fun."--Thad Carhart, author of The Piano Shop on the Left Bank "No wonder no two Steinway pianos are exactly the same! No wonder each has its own special character and personality! In telling us in exquisite detail what has gone into the making of one particular instrument, James Barron has created a classic in its own right. Having read the story makes me love my own Steinway all the more."--Charles Osgood

James Barron is a staff reporter for "The New York Times." Over the past twenty-five years, his writing has appeared in virtually every section of the paper and has ranged from breaking coverage of the September 11 attacks and the 2003 New York City blackout to "The Gates" public art installation in Central Park. An accomplished amateur pianist, he lives in New York City.
Loading...
or
Not Currently Available for Direct Purchase