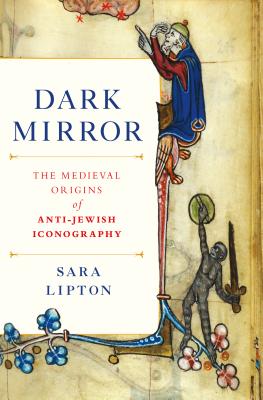 The Medieval Origins of Anti-Jewish Iconography

In Dark Mirror, Sara Lipton offers a fascinating examination of the emergence of anti-Semitic iconography in the Middle Ages

The straggly beard, the hooked nose, the bag of coins, and gaudy apparel—the religious artists of medieval Christendom had no shortage of virulent symbols for identifying Jews. Yet, hateful as these depictions were, the story they tell is not as simple as it first appears.

Drawing on a wide range of primary sources, Lipton argues that these visual stereotypes were neither an inevitable outgrowth of Christian theology nor a simple reflection of medieval prejudices. Instead, she maps out the complex relationship between medieval Christians' religious ideas, social experience, and developing artistic practices that drove their depiction of Jews from benign, if exoticized, figures connoting ancient wisdom to increasingly vicious portrayals inspired by (and designed to provoke) fear and hostility.

At the heart of this lushly illustrated and meticulously researched work are questions that have occupied scholars for ages—why did Jews becomes such powerful and poisonous symbols in medieval art? Why were Jews associated with certain objects, symbols, actions, and deficiencies? And what were the effects of such portrayals—not only in medieval society, but throughout Western history? What we find is that the image of the Jew in medieval art was not a portrait of actual neighbors or even imagined others, but a cloudy glass into which Christendom gazed to find a distorted, phantasmagoric rendering of itself.


Praise For Dark Mirror: The Medieval Origins of Anti-Jewish Iconography…

“In compelling and accessible prose, Lipton shows how images we may take as perennial have a rich and contested history. She wears her deep erudition lightly, but it still comes through in this powerful, effectively illustrated account.” —The Washington Post

“Rewardingly detailed . . . This study of medieval anti-Jewish iconography argues that its proliferation not only reflected the spread of intolerance but in fact actively generated anti-Semitic attitudes.” —The New Yorker

“Dark Mirror is a spectacular achievement. No one interested in the troubled history of the relations of Jews and Christians in medieval Europe can afford to ignore it. Every page is a revelation.” —William Chester Jordan, author of Unceasing Strife, Unending Fear: Jacques de Thérines and the Freedom of the Church in the Age of the Last Capetians

“In this challenging, original, and eloquent study, Sara Lipton takes on our received notion of the place of the Jew in Christian art and culture--and reshapes modern perceptions of medieval history and medieval art.” —Jeffrey F. Hamburger, author of Script as Image

“An illuminating, subtle, yet eminently readable book about artistic images and their curious afterlife. There are few other medievalists who possess simultaneously the artistic eye and deep historical understanding to undertake this pathbreaking research. Dark Mirror is a major study of art, society and history that will change how medieval anti-Judaism is to be explained and related to its modern descendants.” —Paul Freedman, author of Images of the Medieval Peasant

“In this thoughtful, lucid book Sara Lipton challenges recent accounts of the politics of difference, proposing a history that is at once complex and nuanced. She convincingly embraces theology, philosophy, gender, the family and the city--and above all makes a powerful, balanced and engaging case for the way that art itself constituted discourse.” —Paul Binski, author of Becket's Crown:Art and Imagination in Gothic England, 1170-1300

“Among its many accomplishments, Dark Mirror dispels some widely held ideas about how Christians saw and understood Jews in the Middle Ages. With patience and wisdom Sara Lipton unravels an intriguing and fateful history of fascination and disgust. This is a book for anyone interested in the Middle Ages, in the Christian imagination, and in the experiences of the Jews.” —Miri Rubin, author of Mother of God: a History of the Virgin Mary

“Compellingly, thoughtfully, Sara Lipton demonstrates that for medieval Europeans, the ‘Dark Mirror' of Jewry invariably reflected not a distinctive minority group, but society at large. As cartoonist Walt Kelly famously declared, ‘We have met the enemy, and he is us.' Lipton will let none of us escape our common humanity.” —Ingrid Rowland, author of Giordano Bruno: Philosopher/Heretic

“In this remarkable book, Lipton proposes that representations of Jews in high medieval art were not motivated by ingrained anti-Jewish sentiments. Instead, the figure of the Jew emerged as a device to excite Christian devotion. Dark Mirror's arresting claim is that the origins of anti-Jewish attitudes are to be found in Christianity's complex relationship with itself.” —Daniel Lord Smail, author of On Deep History and the Brain

Sara Lipton is an Associate Professor of History at SUNY Stony Brook and the author of Images of Intolerance: The Representation of Jews and Judaism in the Bible moralisée, which won the Medieval Academy of America’s John Nicholas Brown prize. The recipient of fellowships from the New York Public Library’s Cullman Center and the Metropolitan Museum of Art, her writing has appeared in The New York Times, The Los Angeles Times, and The Huffington Post.
Loading...
or support indie stores by buying on
(This book is on backorder)