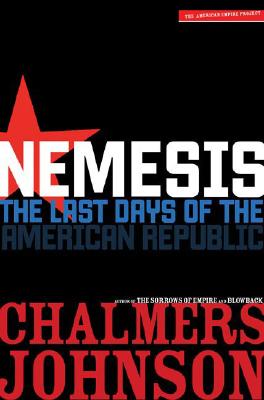 The Last Days of the American Republic

The long-awaited final volume of Chalmers Johnson's bestselling
"Blowback" trilogy confronts the overreaching of the American empire and the threat it poses to the republic
In his prophetic book "Blowback," Chalmers Johnson linked the CIA's clandestine activities abroad to disaster at home. In The Sorrows of Empire, he explored the ways in which the growth of American militarism and the garrisoning of the planet have jeopardized our stability. Now, in "Nemesis," he shows how imperial overstretch is undermining the republic itself, both economically and politically.
Delving into new areas--from plans to militarize outer space to Constitution-breaking presidential activities at home and the devastating corruption of a toothless Congress--"Nemesis" offers a striking description of the trap into which the dreams of America's leaders have taken us. Drawing comparisons to empires past, Johnson explores in vivid detail just what the unintended consequences of our dependence on a permanent war economy are likely to be. What does it mean when a nation's main intelligence organization becomes the president's secret army? Or when the globe's sole "hyperpower," no longer capable of paying for the vaulting ambitions of its leaders, becomes the greatest hyper-debtor of all times?
In his stunning conclusion, Johnson suggests that financial bankruptcy could herald the breakdown of constitutional government in America--a crisis that may ultimately prove to be the only path to a renewed nation.

Praise For Nemesis: The Last Days of the American Republic…

"Chalmers Johnson, a patriot who pulls no punches, has emerged as our most prescient critic of American empire and its pretensions.  Nemesis is his fiercest book--and his best."--Andrew J. Bacevich, author of The New American Militarism

"Nemesis, the final volume in the remarkable Blowback trilogy, completes a true patriot's anguished and devastating critique of the militarism that threatens to destroy the United States from within. In detail and with unflinching candor, Chalmers Johnson decries the discrepancies between what America professes to be and what it has actually become--a global empire of military bases and operations; a secret government increasingly characterized by covert activities, enormous 'black' budgets, and near dictatorial executive power; a misguided republic that has betrayed its noblest ideals and most basic founding principals in pursuit of disastrously conceived notions of security, stability, and progress."--John Dower, author of Embracing Defeat: Japan in the Wake of World War II "Chalmers Johnson's voice has never been more urgently needed, and in Nemesis it rings with eloquence, clarity, and truth."--James Carroll, author of House of War "Nemesis is a stimulating, sweeping study in which Johnson asks a most profound strategic question: Can we maintain the global dominance we now regard as our natural right?  His answer is chilling. You do not have to agree with everything Johnson says--I don't--but if you agree with even half of his policy critiques, you will still slam the book down on the table, swearing, 'We have to change this!'"
--Joseph Cirincione, Senior Vice President for National Security and International Policy, Center for American Progress "Nemesis is a five-alarm warning about flaming militarism, burning imperial attitudes, secret armies, and executive arrogance that has torched and consumed the Constitution and brought the American Republic to death's door. Johnson shares a simple, liberating, and healing path back to worthy republicanism. But the frightening and heart-breaking details contained in Nemesis suggest that the goddess of retribution will not be so easily satisfied before 'the right order of things' is restored."--Karen Kwiatkowski, retired U.S. Air Force Lieutenant Colonel "Last fall a treasonous Congress gave the president license to kidnap, torture--you name it--on an imperial scale. All of us, citizens and non-citizens alike, are fair game. Kudos for not being silent, Chalmers, and for completing your revealing trilogy with undaunted courage."--Ray McGovern, former CIA analyst; co-founder of Veteran Intelligence Professionals for Sanity (VIPS)

Chalmers Johnson, president of the Japan Policy Research Institute, is the author of the bestselling "Blowback" and "The Sorrows of Empire." A frequent contributor to the "Los Angeles Times," the "London Review of Books," and "The Nation," he appeared in the 2005 prizewinning documentary film Why We Fight. He lives near San Diego.
Loading...
or
Not Currently Available for Direct Purchase