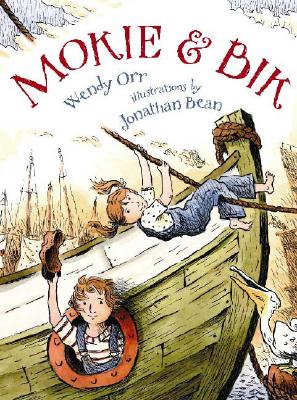 From Mokie & Bik:
Mokie and Bik lived on a boat called Bullfrog. They lived in it, on it, all around it—monkeying up ladders and down ropes, over the wheelhouse and across the cabin floor.
“Twins!” their mother shouted, because the lines of her Art jiggled and jarred when Mokie and Bik played bumpboats. “Get out from underfoot!”
So Bik bumped Mokie out the door—splat!—into nanny Ruby’s bucket as she was sploshing the deck.
“Twins!” shouted Ruby. “Get out from underfoot!”
So they sunned like seals on the wheelhouse roof for about twenty hours till Ruby finished sploshing.

Meet a pair of twins that will monkey their way into your heart!

Mokie is bigger but Bik is faster. They are twins, and they have a nanny Ruby that looks after them while their mom is Arting and their dad is on his ship at sea.
Whether they’re helping Erik the Viking splosh his decks or learning to swim fast as fisk, these two are always overboard or underfoot!
Rambunctious and charming, Mokie and Bik are a pair you won’t soon forget. Wendy Orr’s buoyant language and Jonathan Bean’s gorgeous, detailed pen-and-ink illustrations blend together in a book that is destined to become a classic.  Mokie and Bik is a 2008 Bank Street - Best Children's Book of the Year.

Wendy Orr has written more than twenty children's books, including "Nim's Island." She lives on a dairy farm in Australia with her family.

Jonathan Bean has a master's degree in illustration from the School of Visual Arts in New York. He's illustrated several picture books, but this is his first chapter book.

Praise For Mokie and Bik…

"Orr's colorful use of language brings energy to the story. The many crosshatch drawings are often graeful and always appealing. A lively, unusual choice for young readers."
--School Library Journal