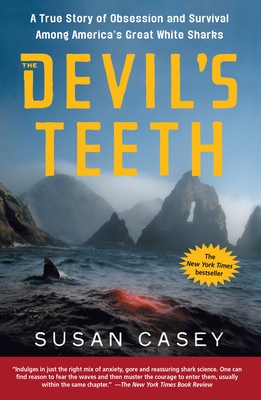 Journalist Susan Casey joins a strange band of surfer-scientists on a remote island off the California coast for some close encounters with the jaws of the world’s most mysterious and fearsome predators in the New York Times bestseller, The Devil’s Teeth: A True Story of Obsession and Survival Among America’s Great White Sharks.

Susan Casey was in her living room when she first saw the great white sharks of the Farallon Islands, their dark fins swirling around a small motorboat in a documentary. These sharks were the alphas among alphas, some longer than twenty feet, and there were too many to count; even more incredible, this congregation was taking place just twenty-seven miles off the coast of San Francisco.

In a matter of months, Casey was being hoisted out of the early-winter swells on a crane, up a cliff face to the barren surface of Southeast Farallon Island-dubbed by sailors in the 1850s the "devil's teeth." There she joined Scot Anderson and Peter Pyle, the two biologists who bunk down during shark season each fall in the island's one habitable building, a haunted, 135-year-old house spackled with lichen and gull guano. Two days later, she got her first glimpse of the famous, terrifying jaws up close and she was instantly hooked; her fascination soon yielded to obsession-and an invitation to return for a full season. But as Casey readied herself for the eight-week stint, she had no way of preparing for what she would find among the dangerous, forgotten islands that have banished every campaign for civilization in the past two hundred years.

The Devil's Teeth is a vivid dispatch from an otherworldly outpost, a story of crossing the boundary between society and an untamed place where humans are neither wanted nor needed.


Praise For The Devil's Teeth: A True Story of Obsession and Survival Among America's Great White Sharks…

“Guaranteed to scare people right out of the water.
” —The Associated Press

“[A] page-turner . . . The book gives you a way of reaching these mysterious isles without getting wet.” —San Francisco Chronicle

Susan Casey is the editor in chief of O, The Oprah Magazine. She was previously the editor in chief of Sports Illustrated Women and an editor at large for Time Inc.'s 180 magazine titles. She also served as the creative director of Outside magazine where, with editor Mark Bryant, she led the magazine to three consecutive, history-making National Magazine Awards for General Excellence. At Outside she was part of the editorial team that developed the stories behind Into Thin Air and The Perfect Storm. Her writing has appeared in Esquire, Time, Fortune, and Sports Illustrated. She is the author of The Devil's Teeth: A True Story of Obsession and Survival Among America's Great White Sharks, The Wave: In Pursuit of the Rogues, Freaks, and Giants of the Ocean, and Voices in the Ocean: A Journey into the Wild and Haunting World of Dolphins. She lives in New York City.