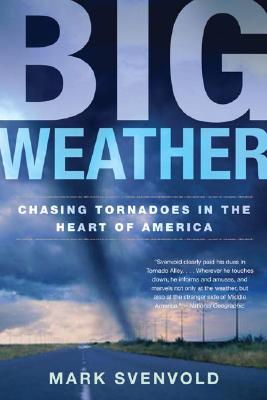 Chasing Tornadoes in the Heart of America

"Svenvold clearly paid his dues in Tornado Alley . . . Wherever he touches down, he informs and amuses, and marvels not only at the weather, but also at the stranger side of Middle America." "--National Geographic"
Why do some people chase the kind of storms that would send most people running for their lives? Why does devastating weather maintain a primal hold on our collective imagination?
With Matt Biddle, an Ahab-like veteran storm chaser, as his guide, Mark Svenvold draws a portrait of a culture enamored by extremes during a 6,000-mile journey through the heartland. Along the way, he encounters an assortment of eccentric characters, including a duo named the Twister Sisters and an IMAX filmmaker who drives an armor-plated truck. And they're all after one thing.
At the heart of the excitement are the awe-inspiring events themselves--a tornado that levels a small Nebraska town, wild twisters that spin cars into the air and, in the case of unlucky Donald Staley, destroy three of his homes in succession.
An entertaining narrative brimming with stylish prose, "Big Weather" is a wryly observed meditation on the weather and the subculture of catastrophilia, the culture and commerce of catastrophic weather.

Mark Svenvold's first book of nonfiction, "Elmer McCurdy: The Misadventures in Life and Afterlife of an American Outlaw," was a Book Sense 76 pick. Poet in residence at Fordham University, Svenvold has won The Nation's "Discovery" Award for poetry. He lives in New York City with his wife, the novelist Martha McPhee, and two children, Livia and Jasper.

Praise For Big Weather: Chasing Tornadoes in the Heart of America…

"A meticulously researched, well-written narrative. Big Weather is much more than an entertaining look at characters from the midway, a cast Svenvold clearly enjoys observing . . . it takes a serious look at a bigger picture." --The Philadelphia Inquirer

"Svenvold is a gifted storyteller; he displays a wide knowledge of classical and general literature in an easy-going fashion powered with vivid anecdotes."--New Scientist (London)

"If you're a fan of movies about extreme weather you'll definitely want to give this book a read. [Big Weather] is right up there beside such The Perfect Storm and Into Thin Air."--Booklist (starred review)

"An entertaining and fast-paced work of narrative journalism. . . . Svenvold even makes the topic of catastrophe insurance engaging. At turns wacky, macho and whimsical."--Kirkus Reviews

"Svenvold's wry, supple prose vividly captures a heartland made up of the awe-inspiring and the absurd."--Publisher's Weekly