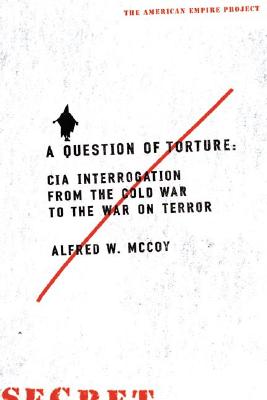 A Question of Torture

CIA Interrogation, from the Cold War to the War on Terror

A startling expose of the CIA's development and spread of psychological torture, from the Cold War to Abu Ghraib and beyond
In this revelatory account of the CIA's secret, fifty-year effort to develop new forms of torture, historian Alfred W. McCoy uncovers the deep, disturbing roots of recent scandals at Abu Ghraib and Guantanamo. Far from aberrations, as the White House has claimed, "A Question of Torture" shows that these abuses are the product of a long-standing covert program of interrogation.
Developed at the cost of billions of dollars, the CIA's method combined "sensory deprivation" and "self-inflicted pain" to create a revolutionary psychological approach--the first innovation in torture in centuries. The simple techniques--involving isolation, hooding, hours of standing, extremes of hot and cold, and manipulation of time--constitute an all-out assault on the victim's senses, destroying the basis of personal identity. McCoy follows the years of research--which, he reveals, compromised universities and the U.S. Army--and the method's dissemination, from Vietnam through Iran to Central America. He traces how after 9/11 torture became Washington's weapon of choice in both the CIA's global prisons and in "torture-friendly" countries to which detainees are dispatched. Finally McCoy argues that information extracted by coercion is worthless, making a case for the legal approach favored by the FBI.
Scrupulously documented and grippingly told, "A Question of Torture" is a devastating indictment of inhumane practices that have spread throughout the intelligence system, damaging American's laws, military, and international standing.

Alfred W. McCoy is a professor of history at the University of Wisconsin-Madison. He is the author of numerous books and articles, including "The Politics

of Heroin in Southeast Asia" and "Closer Than Brothers."
Loading...
or
Not Currently Available for Direct Purchase