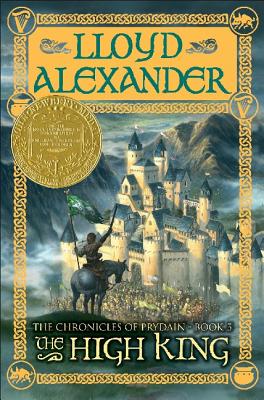 The Chronicles of Prydain, Book 5

The High King by Lloyd Alexander

When the most powerful weapon in the land of Prydain falls into the hands of Arawn, Lord of the Land of Death, Taran and Prince Gwydion rally an army to stand up to the dark forces.

The companions' last and greatest quest is also their most perilous. The biting cold of winter is upon them, adding to the danger they already face. Their journey, fraught with battle and bloodshed, ends at the very portal of Arawn's stronghold. There, Taran is faced with the most crucial decision of his life.

In this breathtaking Newbery Medal-winning conclusion to The Chronicles of Prydain, the faithful friends face the ultimate war between good and evil.


Praise For The High King: The Chronicles of Prydain, Book 5…

“Greater, more disastrous, and demanding more courage are the battles into which Taran leads his followers against Arawn Death-Lord.... The book has the philosophical depth and overtones of great fantasy.” —The Horn Book

“The last may be the best.” —Kirkus Reviews