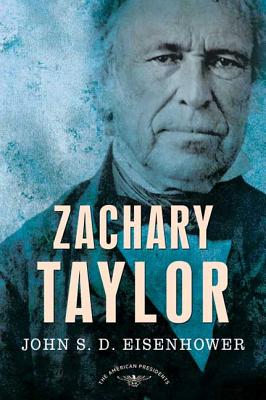 The rough-hewn general who rose to the nation's highest office, and whose presidency witnessed the first political skirmishes that would lead to the Civil War

Zachary Taylor was a soldier's soldier, a man who lived up to his nickname, "Old Rough and Ready." Having risen through the ranks of the U.S. Army, he achieved his greatest success in the Mexican War, propelling him to the nation's highest office in the election of 1848. He was the first man to have been elected president without having held a lower political office.

John S. D. Eisenhower, the son of another soldier-president, shows how Taylor rose to the presidency, where he confronted the most contentious political issue of his age: slavery. The political storm reached a crescendo in 1849, when California, newly populated after the Gold Rush, applied for statehood with an anti- slavery constitution, an event that upset the delicate balance of slave and free states and pushed both sides to the brink. As the acrimonious debate intensified, Taylor stood his ground in favor of California's admission—despite being a slaveholder himself—but in July 1850 he unexpectedly took ill, and within a week he was dead. His truncated presidency had exposed the fateful rift that would soon tear the country apart.

John S. D. Eisenhower was a retired brigadier general, a former U.S. ambassador to Belgium, and the author of numerous works of military history and biography, including General Ike: A Personal Reminiscence; They Fought at Anzio; Yanks: The Epic Story of the American Army in World War I; and So Far from God: The U.S. War with Mexico, 1846–1848.