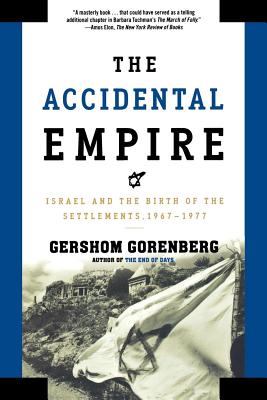 In The Accidental Empire, Gershom Gorenberg examines the strange birth of the settler movement in the ten years following the Six-Day War and finds that it was as much the child of Labor Party socialism as of religious extremism. The giants of Israeli history—Dayan, Meir, Eshkol, Allon—all played major roles in this drama, as did more contemporary figures like Sharon, Rabin, and Peres. Gorenberg also shows how three American presidents turned a blind eye to what was happening in the territories, and reveals their strategic reasons for doing so.

Drawing on newly opened archives and extensive interviews, Gorenberg calls into question much of what we think we know about this issue that continues to haunt the Middle East.


Praise For The Accidental Empire: Israel and the Birth of the Settlements, 1967-1977…

“A thoroughly documented, pathbreaking analysis of Israel's disastrous settlement project in the occupied territories; it reads like a chapter in Barbara Tuchman's well-known book, The March of Folly.” —Amos Elon, author of The Pity of It All and The Israelis: Founders and Sons

“The Accidental Empire is an extraordinary book. It offers insight and understanding into a period that has never been well understood. After the 1967 war, few in Israel recognized the inherent problems of building Jewish settlements beyond the Green Line, for they were torn between reason and spiritual attachment to the land. As Gershom Gorenberg shows in this wonderfully written history, the building of settlements took on a life of its own-too easy to do, too hard to stop, and too easy to simply let happen.” —Dennis Ross, former U.S. envoy to the Middle East, and author of The Missing Peace: The Inside Story of the Fight for Middle East Peace

“A groundbreaking investigation into the origins of one of the most contentious issues in Arab-Israeli relations-and in the Middle East-and a valuable reference for journalists, students, and scholars interested in the region.” —Michael B. Oren, author of Six Days of War: June 1967 and the Making of the Modern Middle East

“Gershom Gorenberg has given us a meticulously researched, dispassionate and highly readable history of how Israel slipped into the settlement of occupied lands. The Accidental Empire is an invaluable guide to one of the Middle East's most complex issues and will puncture illusions on all sides of the Israeli-Palestinian conflict.” —Jackson Diehl, columnist, The Washington Post

“The Accidental Empire casts a stark light on Israel's settlement of the lands it gained in the Six-Day War. Gershom Gorenberg contends that the Israeli left, as well as the Orthodox right, backed a policy that, though born of a felt need for security, encumbered the quest for peace-and that Richard Nixon and Henry Kissinger also failed to foresee the long-term costs. This tragic tale suggests how a fearful nation helped foster the very threats it sought to escape.” —David Greenberg, Rutgers University, author of Nixon’s Shadow: The History of an Image

Gershom Gorenberg is the author of The End of Days: Fundamentalism and the Struggle for the Temple Mount and co-author of Shalom, Friend: The Life and Legacy of Yitzhak Rabin. The Jerusalem correspondent for the Forward, he has also written for The Jerusalem Report, The New York Times Magazine, The Washington Post, The New Republic, and The American Prospect. He lives in Jerusalem with his wife and three children.