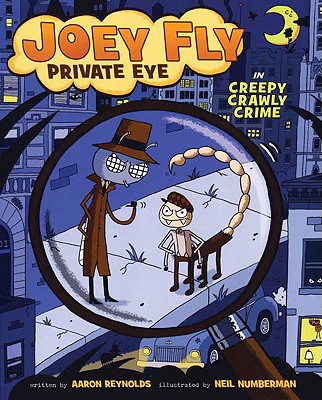 Have you ever had one of those moments? You know—you’re trying to find a stolen diamond pencil box for your beautiful butterfly customer, your mosquito witness won’t give you any information, and your clumsy scorpion assistant has just tampered with your only bit of evidence?

Joey Fly has those moments a lot. In fact, he’s probably having one right now. But that won’t stop him from solving the mystery in Creepy Crawly Crime, his fantastic first graphic novel!

“In this first installment of the Joey Fly, Private Eye series, Reynolds (Buffalo Wings) and Numberman, who makes a wowser of a debut, marry the film noir spoof to the graphic novel, and the result has the sweet smell of success written all over it.”—Publishers Weekly, Starred Review

“This playful pun-a-minute comic-book mystery is sure to charm. Numberman provides detailed backgrounds set in cool blues and warm sepia tones to create a visually engaging landscape smacking of noir-lite. Included at the end is a list of items that young detectives must then page back through the art to find. An auspicious series kick-off.”—Kirkus Reviews

“The plot, characters, and setting in this graphic novel are all inspired from the novels of hardboiled-detective legends Hammett and Chandler, but Reynolds expertly injects a buggy layer of hilarious high jinks. Numberman takes it one step further by using the dark color schemes most associated with film noir combined with clean, detailed art. Kids will get caught in the web of this classic mystery cleverly disguised as a simple bug’s tale.”—Booklist

“This graphic novel joins the swelling ranks of titles that appeal to kids who prefer their comics sans cape and tights. Numberman renders a fully realized bug city, recognizably Gotham-like in its gritting streets…there’s a treasure trove of visual delights scattered throughout.”—BCCB

AARON REYNOLDS hates spiders, but he loves bugs and books. He has written several books for kids, including "Chicks and Salsa." Aaron lives near Chicago with his family. NEIL NUMBERMAN is okay with flies and ladybugs, but he's deathly afraid of cockroaches. He graduated from the MFA illustration program at the School of Visual Arts and lives in Manhattan.
Loading...
or
Not Currently Available for Direct Purchase