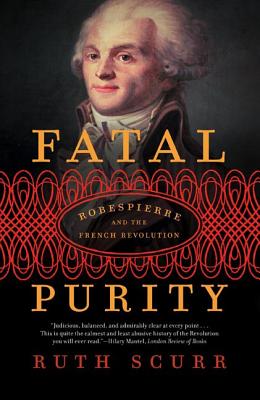 Robespierre and the French Revolution

"Judicious, balanced, and admirably clear at every point. This is quite the calmest and least abusive history of the Revolution you will ever read."
—Hilary Mantel, London Review of Books

Since his execution by guillotine in July 1794, Maximilien Robespierre has been contested terrain for historians. Was he a bloodthirsty charlatan or the only true defender of revolutionary ideals? The first modern dictator or the earliest democrat? Was his extreme moralism a heroic virtue or a ruinous flaw?

Against the dramatic backdrop of the French Revolution, historian Ruth Scurr tracks Robespierre's evolution from provincial lawyer to devastatingly efficient revolutionary leader, righteous and paranoid in equal measure. She explores his reformist zeal, his role in the fall of the monarchy, his passionate attempts to design a modern republic, even his extraordinary effort to found a perfect religion. And she follows him into the Terror, as the former death- penalty opponent makes summary execution the order of the day, himself falling victim to the violence at the age of thirty-six.

Written with epic sweep, full of nuance and insight, Fatal Purity is a fascinating portrait of a man who identified with the Revolution to the point of madness, and in so doing changed the course of history.

Born in 1971, Ruth Scurr studied at Oxford and Cambridge, where she currently teaches politics and history. A prominent literary critic, she has written for The New York Review of Books and The Times Literary Supplement. Fatal Purity is her first book.

Praise For Fatal Purity: Robespierre and the French Revolution…

“Ruth Scurr does for Robespierre and the French Revolution what Quentin Bell did for Virginia Woolf and Bloomsbury: she apprehends the complete personality of the man, the moment, and the movement. A work of genuine scholarship and political literature, Fatal Purity is an electrifying biography of an epoch's vaulting ambitions and wounded pride, radical vision and terrifying uncertainty, bracing heroism and decimating energies.” —Corey Robin, author of Fear: The History of a Political Idea
or support indie stores by buying on
Copyright © 2020 American Booksellers Association