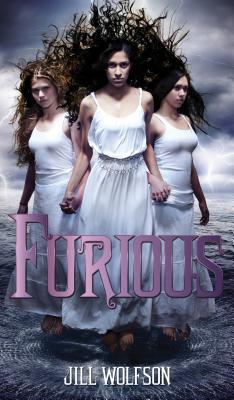 We were only three angry high school girls, to begin with. Alix, the hot-tempered surfer chick; Stephanie, the tree-hugging activist; and me, Meg, the quiet foster kid, the one who never quite fit in. We hardly knew each other, but each of us nurtured a burning anger: at the jerks in our class, at our disappointing parents, at the whole flawed, unjust world.

We were only three angry girls, simmering uselessly in our ocean-side California town, until one day a mysterious, beautiful classmate named Ambrosia taught us what else we could be: Powerful. Deadly. Furious.

Yes, that's us. The three Greek Furies, come to life, ready to take our revenge on everyone who deserves it. And who doesn't deserve it, really? We're done with chances. We are angry. The Furies have come to town.
Jill Wolfson's Furious is an enthralling retelling of Greek myth.

"This is no lightweight, modern-day retelling of a Greek myth like the Pandora series by Carolyn Hennessy or even Percy Jackson—the tale explodes with rage." -- VOYA

"For fans of mythology and retellings." -- School Library Journal

"For readers moving beyond Percy Jackson into the more complex realm of teen angst, this is an enthralling and chilling tale that uses Greek mythology to create a timely fable." -- Kirkus Reviews

Praise for What I Call Life:

* “A powerful, multifaceted exploration of ethics, love and the celebration of life.” —Kirkus Reviews, starred review

“The subject is immediately gripping, and the book is genuinely thoughtful.” —BCCB

Jill Wolfson has worked as a journalist for newspapers and magazines around the country. Her award-winning novels for young people include What I Call Life; Home, and Other Big, Fat Lies; and Cold Hands, Warm Heart. Jill has taught writing at several universities and is a long-time volunteer in a writing program for incarcerated teenagers. She lives by the ocean in Santa Cruz, California.
Loading...
or
Not Currently Available for Direct Purchase