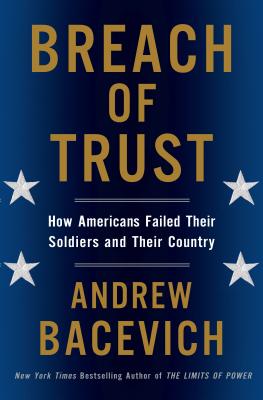 How Americans Failed Their Soldiers and Their Country (American Empire Project)

A blistering critique of the gulf between America's soldiers and the society that sends them off to war, from the bestselling author of The Limits of Power and Washington Rules

The United States has been "at war" in Iraq and Afghanistan for more than a decade. Yet as war has become normalized, a yawning gap has opened between America's soldiers and veterans and the society in whose name they fight. For ordinary citizens, as former secretary of defense Robert Gates has acknowledged, armed conflict has become an "abstraction" and military service "something for other people to do."

In Breach of Trust, bestselling author Andrew J. Bacevich takes stock of the separation between Americans and their military, tracing its origins to the Vietnam era and exploring its pernicious implications: a nation with an abiding appetite for war waged at enormous expense by a standing army demonstrably unable to achieve victory. Among the collateral casualties are values once considered central to democratic practice, including the principle that responsibility for defending the country should rest with its citizens.

Citing figures as diverse as the martyr-theologian Dietrich Bonhoeffer and the marine-turned-anti-warrior Smedley Butler, Breach of Trust summons Americans to restore that principle. Rather than something for "other people" to do, national defense should become the business of "we the people." Should Americans refuse to shoulder this responsibility, Bacevich warns, the prospect of endless war, waged by a "foreign legion" of professionals and contractor-mercenaries, beckons. So too does bankruptcy—moral as well as fiscal.


Praise For Breach of Trust: How Americans Failed Their Soldiers and Their Country (American Empire Project)…

“Scorching… heartbreaking… Bacevich dismantles the warrior myth we civilians and politicians so enjoy worshiping from afar, and replaces that idol with flesh and blood, vulnerable humans, who deserve better than the profligate, wasteful way in which we treat them.” —Rachel Maddow, the New York Times Book Review

“Bacevich offers a brilliant critique of an American military system sharply at variance with our democratic republican ideals. Most disturbing is his compelling argument that the fault lies with We the People. A thought-provoking ride.” —Karl W. Eikenberry, Lieutenant General, U. S. Army (Retired) and former U. S. Ambassador to Afghanistan

“With American warmongers and militarists demanding the bombing of North Korea and intervention in the Syrian civil war, Andrew Bacevich's powerfully written Breach of Trust comes at a critical time. For Bacevich, the problem is perpetual war, a condition fostered by our citizens' detachment from the conflicts America fights. President Obama, Congress, and the Joint Chiefs of Staff should read this book, but the American people must read it because they, to Bacevich, represent the solution.” —Colonel Gian P. Gentile, Associate Professor of History, West Point

“Breach of Trust is grimly eloquent, with prose as effortless as its truths are hard. In this superb history, Andrew Bacevich reveals the civil-military dysfunction that made this a nation of endless conflicts, waged by a professional warrior class, for a public that has traded civic virtue for mindless flag-waving. This is an original, provocative, and invaluable book for anyone who hasn't given up on America.” —Nick Turse, author of Kill Anything That Moves: The Real American War in Vietnam

“Like the soldier that he was, Andrew Bacevich is courageous. As the scholar that he is, he is learned. As a citizen, he is impassioned. All this has combined to produce a unique voice of great value in American political life. In Breach of Trust he anatomizes what he knows best, the acute danger our current military institutions and policies pose to American democracy. Anyone who cherishes that democracy should read and heed this book.” —Jonathan Schell, author of The Unconquerable World and The Real War

Andrew J. Bacevich, a professor of history and international relations at Boston University, served for twenty-three years as an officer in the U.S. Army. He is the author of Washington Rules, The Limits of Power, and The New American Militarism, among other books. His writing has appeared in Foreign Affairs, The Atlantic Monthly, Harper’s, The Nation, The New York Times, The Washington Post, and The Wall Street Journal.
Loading...
or
Not Currently Available for Direct Purchase