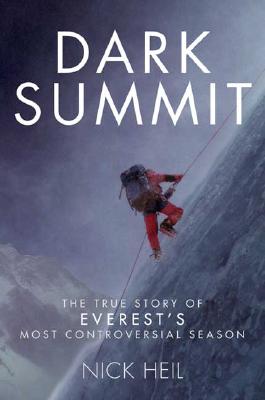 The True Story of Everest's Most Controversial Season

The inside story of the deadly 2006 climbing season on Everest On May 15, 2006, a young British climber named David Sharp lay dying near the top of Mount Everest while forty other climbers walked past him on their way to the summit. A week later, Lincoln Hall, a seasoned Australian climber, was left for dead near the same spot. Hall's death was reported around the world, but the next day he was found alive after spending the night on the upper mountain with no food and no shelter.

If David Sharp's death was shocking, it was hardly singular: despite unusually good weather, ten others died attempting to reach the summit that year. In this meticulous inquiry into what went wrong, Nick Heil tells the full story of the deadliest year on Everest since the infamous season of 1996. He introduces Russell Brice, the commercial operator who has done more than anyone to provide access to the summit via the mountain's north side--and who some believe was partly accountable for Sharp's death. As more climbers attempt the summit each year, Heil shows how increasingly risky expeditions and unscrupulous outfitters threaten to turn Everest into a deadly circus.

Written by an experienced climber and outdoor writer, "Dark Summit" is both a riveting account of a notorious climbing season and a troubling investigation into whether the pursuit of the ultimate mountaineering prize has spiraled out of control.


Praise For Dark Summit: The True Story of Everest's Most Controversial Season…

“In this authoritative, colorful look at the grimmest Everest season in years, Dark Summit carries forward Outside magazine's formidable tradition of high alpine literature. Nick Heil is alive to Everest's majesty but fiercely skeptical of those hubristic souls who attempt to ‘conquer’ her. Through rock-solid reporting and vital prose, Heil leads us up into this rarefied world, step by hypoxic step.”—Hampton Sides, author of Ghost Soldiers and Blood and Thunder

“Here is humanity itself, personified in exemplary fashion by Nick Heil, addressing the Everest culture's lack of compassion and coming up with the right answers. Dark Summit is an extraordinary tale, ribboned with wisdom and profound insight, delivered by a first-rate storyteller. I consider the book not a sequel to Krakauer's Into Thin Air, but an equal.”—Bob Shacochis, author of The Immaculate Invasion

"Dark Summit illuminates the nuanced personalities of Everest's modern commercial age accurately, with neither heroic romanticism nor guile. Nick Heil takes a critical yet objective look at Everest and the community of Everest climbers, and then leaves you to pass judgment. If you couldn't put down Into Thin Air, you must read Dark Summit to understand what it means to climb Everest today and why anyone might accept the risk.”—Peter Athans, seven-time Everest summiter and The North Face athlete

Nick Heil first wrote about the 2006 climbing season for "Men's Journal." Now a freelance journalist based in Santa Fe, New Mexico, he was a senior editor at "Outside "from 1999 to 2006. He has also worked as a climbing and skiing instructor, and has traveled extensively in Europe, Asia, and North America.
Loading...
or
Not Currently Available for Direct Purchase