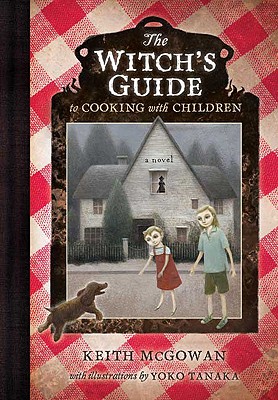 The Witch's Guide to Cooking with Children

When Sol and Connie Blink move to Grand Creek, one of the first people to welcome them is an odd older woman, Fay Holaderry, and her friendly dog, Swift, who carries a very strange bone in his mouth. Sol knows a lot more than the average eleven-year-old, so when he identifies the bone as human, he and Connie begin to wonder if their new neighbor is up to no good.

In a spine-tingling adventure that makes them think twice about who they can trust, Sol and Connie discover that solving mysteries can be a dangerous game even for skilled junior sleuths.


Praise For The Witch's Guide to Cooking with Children…

“A semisweet literary treat for the kiddies . . .  Keith McGowan’s re-telling of Hansel and Gretel’s misadventures, “The Witch’s Guide to Cooking with Children,” retains the disturbing vibe of the original, but spices it up with some seriously cerebral humor that will delight and challenge the inquisitive youngster.” —The New Yorker, “Book Bench” section

“Oooooh. That witch from Hansel and Gretel is back and she very well may be living right…next…door. In a conspiracy of lunacy, a whole town seems to be in cahoots with chaos to get those two little urchins to succumb to being the entree on the witch’s table. This updated book is still deliciously naughty.”—Kiwi magazine

“McGowan’s modern retelling of the Hansel and Gretel plot is nuanced, fascinating, and gratifyingly dark without being graphic or horrific.” —The Bulletin of the Center for Children’s Books

KEITH MCGOWAN has worked most of his life as an educator. He helped run an elementary after school program and day camp, taught mathematics and science, volunteered for a year as a teacher in Haiti, and tutored students who were unable to attend school full time. An avid traveler, Keith began writing "The Witch's Guide to Cooking with Children," in Himachal Pradesh, India, staring at the Himalayan mountains, and continued working on it in Boston, New Orleans, and Chicago, and Vienna, Austria, where he now lives with his wife. "The Witch's Guide to Cooking with Children" is his first novel for children.

YOKO TANAKA is the illustrator of several books, including "Sparrow Girl." She lives in Thailand.
Loading...
or
Not Currently Available for Direct Purchase