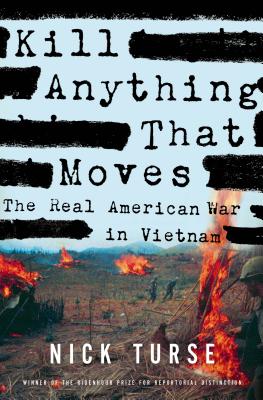 Kill Anything That Moves

Based on classified documents and first-person interviews, a startling history of the American war on Vietnamese civilians

Americans have long been taught that events such as the notorious My Lai massacre were isolated incidents in the Vietnam War, carried out by "a few bad apples." But as award-winning journalist and historian Nick Turse demonstrates in this groundbreaking investigation, violence against Vietnamese noncombatants was not at all exceptional during the conflict. Rather, it was pervasive and systematic, the predictable consequence of orders to "kill anything that moves."

Drawing on more than a decade of research in secret Pentagon files and extensive interviews with American veterans and Vietnamese survivors, Turse reveals for the first time how official policies resulted in millions of innocent civilians killed and wounded. In shocking detail, he lays out the workings of a military machine that made crimes in almost every major American combat unit all but inevitable. Kill Anything That Moves takes us from archives filled with Washington's long-suppressed war crime investigations to the rural Vietnamese hamlets that bore the brunt of the war; from boot camps where young American soldiers learned to hate all Vietnamese to bloodthirsty campaigns like Operation Speedy Express, in which a general obsessed with body counts led soldiers to commit what one participant called "a My Lai a month."

Thousands of Vietnam books later, Kill Anything That Moves, devastating and definitive, finally brings us face-to-face with the truth of a war that haunts Americans to this day.


Praise For Kill Anything That Moves: The Real American War in Vietnam (American Empire Project)…

“An indispensable new history of the war… Kill Anything That Moves is a paradigm-shifting, connect-the-dots history of American atrocities that reads like a thriller; it will convince those with the stomach to read it that all these decades later Americans, certainly the military brass and the White House, still haven't drawn the right lesson from Vietnam.” —San Francisco Chronicle

“A powerful case… With his urgent but highly readable style, Turse delves into the secret history of U.S.-led atrocities. He has brought to his book an impressive trove of new research—archives explored and eyewitnesses interviewed in the United States and Vietnam. With superb narrative skill, he spotlights a troubling question: Why, with all the evidence collected by the military at the time of the war, were atrocities not prosecuted?” —Washington Post

“There have been many memorable accounts of the terrible things done in Vietnam-memoirs, histories, documentaries and movies. But Nick Turse has given us a fresh holistic work that stands alone for its blending of history and journalism, for the integrity of research brought to life through the diligence of first-person interviews...Here is a powerful message for us today-a reminder of what war really costs” —Bill Moyers, Moyers & Company

“In Kill Anything that Moves, Nick Turse has for the first time put together a comprehensive picture, written with mastery and dignity, of what American forces actually were doing in Vietnam. The findings disclose an almost unspeakable truth… Like a tightening net, the web of stories and reports drawn from myriad sources coalesces into a convincing, inescapable portrait of this war—a portrait that, as an American, you do not wish to see; that, having seen, you wish you could forget, but that you should not forget.” —Jonathan Schell, The Nation

“A masterpiece… Kill Anything That Moves is not only one of the most important books ever written about the Vietnam conflict but provides readers with an unflinching account of the nature of modern industrial warfare.… Turse, finally, grasps that the trauma that plagues most combat veterans is a result not only of what they witnessed or endured, but what they did.” —Chris Hedges, Truthdig

“Explosive… A painful yet compelling look at the horrors of war.” —Parade

“If you are faint-hearted, you might want to keep some smelling salts nearby when you read it. It's that bad… The truth hurts. This is an important book” —Dayton Daily News

“Kill Anything That Moves argues, persuasively and chillingly, that the mass rape, torture, mutilation and slaughter of Vietnamese civilians was not an aberration—not a one-off atrocity called My Lai—but rather the systematized policy of the American war machine. These are devastating charges, and they demand answers because Turse has framed his case with deeply researched, relentless authority... There is no doubt in my mind that Kill Anything That Moves belongs on the very highest shelf of books on the Vietnam War.” —The Millions

“In the sobering Kill Anything That Moves, Nick Turse provides an exhaustive account of how thousands upon thousands of innocent, unarmed South Vietnamese civilians were senselessly killed by a military that equated corpses with results.... Kill Anything That Moves is a staggering reminder that war has its gruesome subplots hidden underneath the headlines but they're even sadder when our heroes create them.” —Bookpage

“An in-depth take on a horrific war… A detailed, well-documented account.” —Publishers Weekly

“This book is an overdue and powerfully detailed account of widespread war crimes--homicide and torture and mutilation and rape committed by American soldiers over the course of our military engagement in Vietnam. Nick Turse's research and reportage is based in part on the U.S. military's own records, reports, and transcripts, many of them long hidden from public scrutiny. Kill Anything That Moves is not only a compendium of pervasive and illegal and sickening savagery toward Vietnamese civilians, but it is also a record of repetitive deceit and cover-ups on the part of high ranking officers and officials. In the end, I hope, Turse's book will become a hard-to-avoid, hard-to-dismiss corrective to the very common belief that war crimes and tolerance for war crimes were mere anomalies during our country's military involvement in Vietnam.” —Tim O’Brien, author of The Things They Carried

“Nick Turse reminds us again, in this painful and important book, why war should always be a last resort, and especially wars that have little to do with American national security. We failed, as Turse makes clear, to deal after the Vietnam War with the murders that took place, and today—four decades later—the lessons have yet to be learned. We still prefer kicking down doors to talking.” —Seymour Hersh, staff writer, The New Yorker

“This deeply disturbing book provides the fullest documentation yet of the brutality and ugliness that marked America's war in Vietnam. No doubt some will charge Nick Turse with exaggeration or overstatement. Yet the evidence he has assembled is irrefutable. With the publication of Kill Anything That Moves, the claim that My Lai was a one-off event becomes utterly unsustainable.” —Andrew J. Bacevich, Colonel, U.S. Army (Ret.), and author of Washington Rules: America’s Path To Permanent War

“American patriots will appreciate Nick Turse's meticulously documented book, which for the first time reveals the real war in Vietnam and explains why it has taken so long to learn the whole truth.” —James Bradley, author of Flags of Our Fathers

“Meticulously researched, Kill Anything That Moves is the most comprehensive account to date of the war crimes committed by U.S. forces in Vietnam and the efforts made at the highest levels of the military to cover them up. It's an important piece of history.” —Frances FitzGerald, author of Fire in the Lake: The Vietnamese and the Americans in Vietnam

“In this deeply researched and provocative book Nick Turse returns us to Vietnam to raise anew the classic dilemmas of warfare and civil society. My Lai was not the full story of atrocities in Vietnam, and honestly facing the moral questions inherent in a ‘way of war' is absolutely necessary to an effective military strategy. Turse documents a shortfall in accountability during the Vietnam War that should be disturbing to every reader.” —John Prados, author of Vietnam: The History of an Unwinnable War, 1945–1975

“Nick Turse's Kill Anything That Moves is essential reading, a powerful and moving account of the dark heart of the Vietnam War: the systematic killing of civilians, not as aberration but as standard operating procedure. Until this history is acknowledged it will be repeated, one way or another, in the wars the U.S. continues to fight.” —Marilyn Young, author of The Vietnam Wars, 1945–1990

“Nick Turse has done more than anyone to demonstrate—and document—what should finally be incontrovertible: American atrocities in Vietnam were not infrequent and inadvertent, but the commonplace and inevitable result of official U.S. military policy. And he does it with a narrative that is gripping and deeply humane.” —Christian Appy, author of Patriots: The Vietnam War Remembered From All Sides

“No book I have read in decades has so shaken me, as an American. Turse lays open the ground-level reality of a war that was far more atrocious than Americans at home have ever been allowed to know. He exposes official policies that encouraged ordinary American soldiers and airmen to inflict almost unimaginable horror and suffering on ordinary Vietnamese, followed by official cover-up as tenacious as Turse's own decade of investigative effort against it. Kill Anything That Moves is obligatory reading for Americans, because its implications for the likely scale of atrocities and civilian casualties inflicted and covered up in our latest wars are inescapable and staggering.” —Daniel Ellsberg, author of Secrets: A Memoir of Vietnam and the Pentagon Papers

Nick Turse, an award-winning journalist and historian, is the author of The Complex and the research director for the Nation Institute’s TomDispatch.com. His work has appeared in the Los Angeles Times, the San Francisco Chronicle, and The Nation. Turse’s investigations of U.S. war crimes in Vietnam have gained him a Ridenhour Prize for Reportorial Distinction, a Guggenheim Fellowship, and a fellowship at Harvard University’s Radcliffe Institute for Advanced Study. He lives near New York City.
Loading...
or
Not Currently Available for Direct Purchase