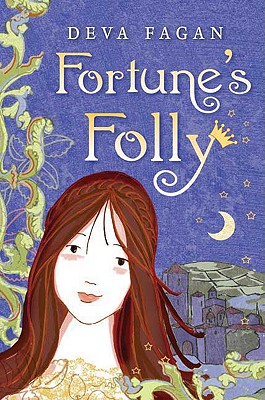 Ever since her mother died and her father lost his shoemaking skills, Fortunata has survived by telling fake fortunes. But when she’s tricked into telling a grand fortune for a prince, she is faced with the impossible task of fulfilling her wild prophecy—or her father will be put to death.

Now Fortunata has to help Prince Leonato secure a magic sword, vanquish a wicked witch, discover a long-lost golden shoe, and rescue the princess who fits it. If only she hadn’t fallen in love with the prince herself !

“Mixing romance, adventure, and unpredictable plot twists, this heartwarming story is a must for every collection.”—School Library Journal

“All the characters are flawed in different ways, lending a sense of realism to a narrative that might otherwise have seemed remote in time and place. And, as in a true fairy tale, the ending brings happiness to the protagonists and justice to their antagonists. A pleasing first novel.”—Booklist

“Readers will relish the clever allusions to stories from ‘Rapunzel’ to ‘Cinderella,’ rendering the first line of this winning debut novel that much more terrific: ‘Life would have been much easier if I believed in fairy tales.’”—Kirkus Reviews

“In her debut novel, Deva Fagan cleverly slips elements of several beloved fairy tales, from ‘Cinderella’ to ‘Rapunzel,’ into her story, playfully turning these old motifs on their heads... This tough, creative, fearless heroine will give readers someone to root for—whether they believe in fairy tales or not.”—Bookpage

"Fortunata’s narration is sassy yet sensible, believable in both her desperate and poweful moments, and laced with humor about her father’s hideous shoes. Fans of fairy-tale fiction will find this a perfect fit."—BCCB “Tidbits of classic fairy tales, such as Cinderella, Rapunzel, and The Elves and the Shoemaker, are woven into this deftly written debut novel, which ends happily ever after, as all good fairy tales must. Offer this one to the girls who are reading Gail Carson Levine.”—VOYA

DEVA FAGAN likes searching for patterns, which is how she explains both her degree in mathematics and the echoes of old fairy tales in her stories. She lives in Maine with her husband and her dog. This is her first book.
Loading...
or
Not Currently Available for Direct Purchase