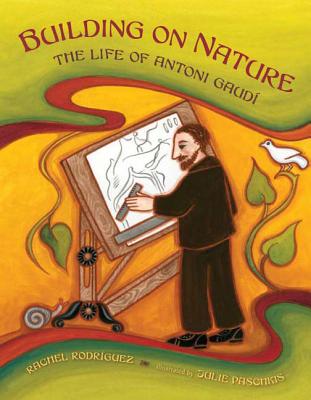 The Life of Antoni Gaudi

In a small village in Spain

His home is in Catalonia, a place of jagged mountain peaks and silvery olive trees, splashed by the sparkling sea. The wild beauty of this landscape makes a deep impression. He thinks of it as the Great Book of Nature, and he will read from it all of his life.

Gaudí becomes an architect, learning the rules of form and structure that buildings are supposed to follow. But the shapes and colors of the natural world still inspire him, and he works them into his buildings. Leaves climb up walls. Pillars are giant animal feet. A long bench snakes around a playground.

Antoni Gaudí turned nature into art, and in the process he revolutionized the world of architecture.


Praise For Building on Nature: The Life of Antoni Gaudi…

“On one level, the result is a book that uses the artist's timeless works to construct a sprawling but coherent illustration of the creative process. On another, it is simply pure joy to look at.” —Booklist, starred review

“There's plenty here to have young aesthetes hankering for a plane ticket to Spain.” —Kirkus Reviews

“An accessible introduction to a man who was inspired by the natural world to create some highly original buildings.” —School Library Journal

“How wild and wonderful imaginings are realized in architecture is the subject of Building on Nature: The Life of Antoni Gaudí, written by San Francisco author Rachel Rodríguez and illustrated by Julie Paschkis (Holt; 32 pages; $16.99; ages 5-8). Curvy structures such as the Sagrada Familia Cathedral in Barcelona ‘sparkle and glitter and whisper with joy,' according to this charming portrait of their Catalonian designer.” —San Francisco Chronicle

Rachel Rodríguez has published in the Los Angeles Times and aired essays on northern California public radio. She lives in San Francisco. She is the author of Through Georgia’s Eyes and Building on Nature.

JULIE PASCHKIS won a Boston Globe-Horn Book Honor for Yellow Elephant. She is also the illustrator for the Worldwide Stories for children and lives in Seattle.
Loading...
or
Not Currently Available for Direct Purchase