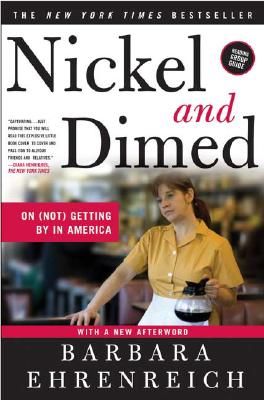 On (Not) Getting By in America

Acclaimed as an instant classic upon publication, "Nickel and Dimed" has sold more than 1.5 million copies and become a staple of classroom reading. Chosen for "one book" initiatives across the country, it has fueled nationwide campaigns for a living wage. Funny, poignant, and passionate, this revelatory firsthand account of life in low-wage America--the story of Barbara Ehrenreich's attempts to eke out a living while working as a waitress, hotel maid, house cleaner, nursing-home aide, and Wal-Mart associate--has become an essential part of the nation's political discourse.

Now, in a new afterword, Ehrenreich shows that the plight of the underpaid has in no way eased: with fewer jobs available, deteriorating work conditions, and no pay increase in sight, "Nickel and Dimed" is more relevant than ever.


Praise For Nickel and Dimed: On (Not) Getting By in America…

". . . you will read this explosive little book cover to cover and pass it on to all your friends and relatives."
—Diana Henriques, The New York Times [Business Section]

"With grace and wit, Ehrenreich discovers . . . the irony of being nickel and dimed during unprecedented prosperity."
—Eileen Boris, The Boston Globe

"Barbara Ehrenreich . . . is our premier reporter of the underside of capitalism."
—Dorothy Gallagher, The New York Times Book

"Reading Ehrenreich is good for the soul."
—Molly Ivins

"Ehrenreich's scorn withers, her humor stings, and her radical light shines on."
—The Boston Globe

"One of today's most original writers."
—The New York Times

"Barbara Ehrenreich is smart, provocative, funny, and sane in a world that needs more of all four."
—Diane Sawyer

Barbara Ehrenreich is the bestselling author of "Bait and Switch, Bright-sided, This Land Is Their Land, Dancing in the Streets" and "Blood Rites," among others. A frequent contributor to "Harper's" and "The Nation," she has also been a columnist at" The New York Times" and "Time" magazine. She is the winner of the "L.A. Times" Book Prize for Current Interest and ALA Notable Books for Nonfiction. Ehrenreich was born in Butte, Montana, when it was still a bustling mining town. She studied physics at Reed College, and earned a Ph.D. in cell biology from Rockefeller University. Rather than going into laboratory work, she got involved in activism, and soon devoted herself to writing her innovative journalism. She lives and works in Florida.
Loading...
or
Not Currently Available for Direct Purchase