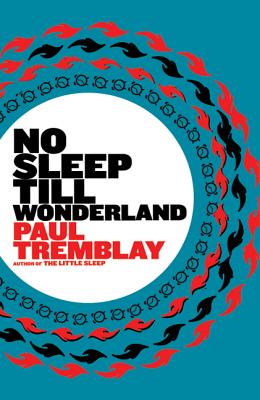 No Sleep till Wonderland (Paperback)

Mark Genevich, narcoleptic detective, is caught between friends and a police investigation in this wickedly riveting PI novel with a twist—a follow-up to The Little Sleep

Mark Genevich is stuck in a rut: his narcolepsy isn't improving, his private-detective business is barely scraping by, and his landlord mother is forcing him to attend group therapy sessions. Desperate for companionship, Mark goes on a two-day bender with a new acquaintance, Gus, who is slick and charismatic—and someone Mark knows very little about. When Gus asks Mark to protect a friend who is being stalked, Mark inexplicably finds himself in the middle of a murder investigation and soon becomes the target of the police, a sue-happy lawyer, and a violent local bouncer. Will Mark learn to trust himself in time to solve the crime—and in time to escape with his life?

Written with the same "witty voice that doesn't let go"* that has won Paul Tremblay so many fans, No Sleep Till Wonderland features a memorable detective whose only hope for reconciling with his difficult past is to keep moving—asleep or awake—toward an uncertain future.

Paul Tremblay is the author of No Sleep Till Wonderland and The Little Sleep. He has won acclaim for his short fiction and received two nominations for the 2007 Bram Stoker Award, and he lives in Massachusetts with his wife and two children.


Praise For No Sleep till Wonderland: A Novel…

“No Sleep till Wonderland delivers on the tremendous promise of The Little Sleep, simultaneously paying homage to classic noir fiction while creating a damaged and irrevocably lost anti-hero in PI Mark Genevich, who is always on the verge of emotional and physical collapse. This is a novel filled with black humor but an even blacker subtext that makes the reader question the nature of reality and self; heady stuff for a crime novel, for sure, but Paul Tremblay is a fearless writer and No Sleep till Wonderland is positively magnetic fiction.” —Tod Goldberg, author of Other Resort Cities and Simplify

“Snappy prose, a brilliantly original detective and a cast of sharply drawn low lifes--Paul Tremblay mixes it up with style. In the end, No Sleep till Wonderland is much more than just a crime book--it's all about the narrator's unique take on the world. Thoroughly recommended.” —Simon Lewis, author of Bad Traffic

“Like The Little Sleep, this one plays it straight. There's no gimmickry with Genevich's narcolepsy, and there's no condescension with his character, and like TLS, the writing sings with all these wonderful weird free associations. As much as I liked TLS, I liked this one even more. Tremblay's voice is one of the most original in hardboiled PI fiction, and he has definitely breathed new life into the genre. This is great stuff, and I can't recommend it strongly enough. Nobody right now is writing more original or better PI novels than Tremblay.” —Dave Zeltserman, author of Pariah