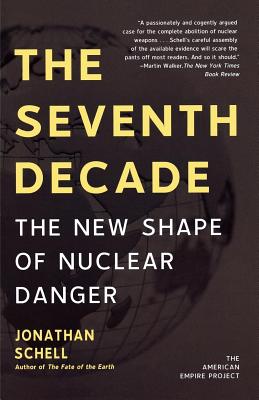 From the bestselling author of The Fate of the Earth, a provocative look at the urgent threat posed by America's new nuclear policies

When the cold war ended, many Americans believed the nuclear dilemma had ended with it. Instead, the bomb has moved to the dead center of foreign policy and even domestic scandal. From missing WMDs to the outing of CIA agent Valerie Plame, nuclear matters are back on the front page.

In this provocative book, Jonathan Schell argues that a revolution in nuclear affairs has occurred under the watch of the Bush administration, including a historic embrace of a first-strike policy to combat proliferation. The administration has also encouraged a nuclear renaissance at home, with the development of new generations of such weaponry. Far from curbing nuclear buildup, Schell contends, our radical policy has provoked proliferation in Iran, North Korea, and elsewhere; exacerbated global trafficking in nuclear weapons; and taken the world into an era of unchecked nuclear terror. Incisive and passionately argued, The Seventh Decade offers essential insight into what may prove the most volatile decade of the nuclear age.

“Jonathan Schell has been warning us about the dangers of nuclear weapons since his seminal book, The Fate of the Earth. The Seventh Decade shows how pressing this issue still is. Schell offers a provocative analysis of the current dangers and puts them in the context of history. It's a fascinating and important book.” —Walter Isaacson, author of Einstein: His Life and Universe

“In yet another tour de force, Jonathan Schell, our chronicler as conscience, addresses the salient fact of the era--that amid the ultimate terror of nuclear weapons, Americans live under one of the most heedless and dangerous governments in history. Once again, Schell honors us with a profound warning. Our consummate shame is that we do nothing about it.” —Roger Morris, author of Taking Comfort

“Jonathan Schell has written a courageous book, a clarion call for the world to stop its drift toward 'nuclear anarchy'--which cannot occur absent a radical change in U. S. nuclear policy.” —Andrew J. Bacevich, author of The New American Militarism: How Americans are Seduced by War

“No voice is as clear, no mind is as sharp, and no writings about nuclear weapons have been as perceptive as Jonathan Schell's books and articles since 1982. Now, in The Seventh Decade, Schell once again reveals in lucid prose the most inconvenient truth: the nuclear weapons policies of our government endanger our security, our planet and the very existence of our specie. This is a book that every responsible voter should read before November 2008.” —Martin J. Sherwin, Pulitzer prize-winning author of American Prometheus: The Triumph and Tragedy of J. Robert Oppenheimer

Jonathan Schell, author of The Unconquerable World and The Fate of the Earth among many other titles, is the Nation Institute’s Harold Willens Peace Fellow. His “Letter from Ground Zero” column appears in The Nation regularly. He also writes for Harper’s, The Atlantic Monthly, Foreign Affairs, and Tomdispatch.com. He is a distinguished visiting fellow at the Yale Center for the Study of Globalization.
or support indie stores by buying on