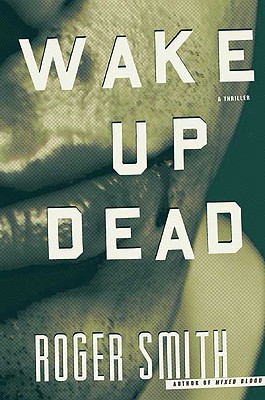 A split-second decision with no second chance: get it wrong and you wake up dead.

On a blowtorch-hot night in Cape Town, American ex-model Roxy Palmer and her gunrunner husband, Joe, are carjacked, leaving Joe lying in a pool of blood. As the carjackers make their getaway, Roxy makes a fateful choice that changes her life forever.

Disco and Godwynn, the ghetto gangbangers who sped away in Joe’s convertible, will stop at nothing to track her down. Billy Afrika, a mixed-race ex-cop turned mercenary, won’t let her out of his sight because Joe owed him a chunk of money. And remorselessly hunting them all is Piper, a love-crazed psychopath determined to renew his vows with his jailhouse “wife,” Disco.

As these desperate lives collide and old debts are settled in blood, Roxy is caught in a wave of escalating violence in the beautiful and brutal African seaport. With savage plotting and breakneck suspense that ends in a shattering cataclysm of violence, Wake Up Dead confirms Roger Smith as one of the world’s best new thriller writers.


Praise For Wake Up Dead: A Cape Town Thriller…

"Wake Up Dead is proof that Noir is alive and flourishing. With his second novel, Roger Smith reaches another level of unrelenting Noir, with all the elements of the genre given homage yet wonderfully mutated. Dark and brutal, the novel has a focused, poetic style that stays with you long after you finish reading. Smith is Charles Willeford via James Ellroy, and South Africa is his Noir kingdom."—Ken Bruen, author of Guards

"From the terrific first sentence, the reader is firmly hooked in this dark South African thriller of murder, drugs, corruption, and revenge . . . with bizarre characters Elmore Leonard might appreciate and an intricate plot of tangled relation-ships across racial divides. Highly recommended for those wanting their noir as hard-boiled as it gets" —Roland Person, Library Journal (starred review)

"An intricate Robert Altman–like narrative that, when the pieces finally connect, forms a terrifying portrait of Cape Flats…. Smith swiftly and steadily blasts away with abrupt, crude and profane conflicts."--Kirkus

"Smith keeps the pacing brisk … A prime destination for readers who like to detour from crime-fiction’s beaten path."—Booklist

"If you are a fan of George Pelecanos or Dennis Lehane, give Roger Smith a close look." --BookPage

Roger Smith, an accomplished screenwriter, director, and producer, was born in Johannesburg, South Africa, and now lives in Cape Town. He is the author of the thrillers "Mixed Blood" and "Wake Up Dead" and is writing a third novel. Visit Roger Smith's website at www.RogerSmithBooks.com.
Loading...
or
Not Currently Available for Direct Purchase