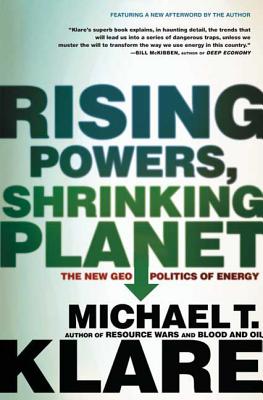 The New Geopolitics of Energy

From the author of the now-classic Resource Wars, an indispensable account of how the world's diminishing sources of energy are radically changing the international balance of power

Recently, an unprecedented Chinese attempt to acquire the major American energy firm Unocal was blocked by Congress amidst hysterical warnings of a Communist threat. But the political grandstanding missed a larger point: the takeover bid was a harbinger of a new structure of world power, based not on market forces or on arms and armies but on the possession of vital natural resources.

Surveying the energy-driven dynamic that is reconfiguring the international landscape, Michael Klare, the preeminent expert on resource geopolitics, forecasts a future of surprising new alliances and explosive danger. World leaders are now facing the stark recognition that all materials vital for the functioning of modern industrial societies (not just oil and natural gas but uranium, coal, copper, and others) are finite and being depleted at an ever-accelerating rate. As a result, governments rather than corporations are increasingly spearheading the pursuit of resources. In a radically altered world— where Russia is transformed from battered Cold War loser to arrogant broker of Eurasian energy, and the United States is forced to compete with the emerging "Chindia" juggernaut—the only route to survival on a shrinking planet, Klare shows, lies through international cooperation.

Rising Powers, Shrinking Planet surveys the energy-driven dynamic that is reconfiguring the international landscape, and argues that the only route to survival in our radically altered world lies through international cooperation.

"Klare's superb book explains, in haunting detail, the trends that will lead us into a series of dangerous traps unless we muster the will to transform the way we use energy." -- Bill McKibben

“A brilliant exposition on one of the gigantic problems facing society. Klare is a top expert on the politics of energy and resources. Read him!” —Paul R. Ehrlich, author of The Dominant Animal

“Four centuries ago, as the conquistadors roamed through South America, it was the search for gold that drove the clash of empires. A hundred years later, as the great powers fought over the West Indies, it was the quest for land that could grow sugar cane. Today, the key commodity is oil. No one knows this subject better than Michael Klare, and his book is a trenchant and informative guide to what the fatal thirst for oil means for the tensions and rivalries of our fragile planet.” —Adam Hochschild, author of King Leopold's Ghost

“If you want to understand the future of international relations, worry less about ideology and more about oil reserves. Michael Klare's superb new book explains, in haunting detail, the trends that will lead us into a series of dangerous traps, unless we muster the will to transform the way we use energy in this country. As illuminating as it is unsettling.” —Bill McKibben, author The Bill McKibben Reader

“Once again, Michael Klare has vividly spelled out the geopolitical ramifications of resource scarcity as he did in both Blood and Oil and Resource Wars. His new book deals with our pending clash as we enter an unprecedented time of surging demand for oil while its conventional supply peaks. The book is a serious must read for any student of geopolitics.” —Matthew R. Simmons, author of Twilight in the Desert

“When danger looms, ignorance is not bliss. Rising Powers, Shrinking Planet defines a new benchmark for understanding the perilous complexities of strategic natural resources and how they shape the modern world. Klare articulates his message with sober honesty and appropriate urgency. If knowledge is power, it is also empowering; let us use this information to rekindle hope and commit to action, vigorously adopting the practical and profitable solutions that already do exist.” —Amory B. Lovins, author of Winning the Oil Endgame

Michael T. Klare is the author of more than fifteen books, including Resource Wars and Rising Powers, Shrinking Planet. A contributor to Current History, Foreign Affairs, and the Los Angeles Times, he is the defense correspondent for The Nation and the director of the Five College Program in Peace and World Security Studies at Hampshire College in Amherst, Massachusetts.