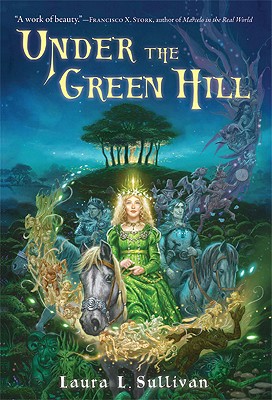 Under the Green Hill (Hardcover)

Meg and her siblings have been sent to the English countryside for the summer to stay with elderly relatives. The children are looking forward to exploring the ancient mansion and perhaps discovering a musty old attic or two filled with treasure, but never in their wildest dreams did they expect to find themselves in the middle of a fairy war.

When Rowan pledges to fight for the beautiful fairy queen, Meg is desperate to save her brother. But the Midsummer War is far more than a battle between mythic creatures: Everything that lives depends on it. How can Meg choose between family and the fate of the very land itself?

Laura L. Sullivan is a former newspaper editor, biologist, social worker and deputy sheriff who writes because that's the easiest way to do everything in the world. She lives in the woods of Kentucky with her loved ones. Under the Green Hill is her first novel.

Praise For Under the Green Hill…

“Sullivan draws heavily on her knowledge of Middle English folklore and creates a story rich with memorable characters and evocative language. The ending begs for a sequel in which readers can learn more about the history between the two opposing fairy courts and how the Morgan children fulfill their destinies.” --School Library Journal

“With colorful characters, from Jenny Greenteeth to the dragonlike Wyrm, this engaging fantasy will attract readers intrigued by English folklore.” --Booklist

“Sullivan fashions an unforgettable landscape and suggests that the line between the real and fairy worlds remains highly permeable. She pays tribute to time-honored fairy traditions while also introducing questions of free will, trust and loyalty in a refreshingly original tale.” --Shelf Awareness