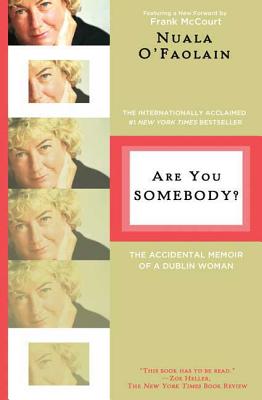 The Accidental Memoir of a Dublin Woman

"You don't want the book to end; it glows with compassion and you want more, more because you know this is a fine wine of a life, richer as it ages."—Frank McCourt, author of Angela's Ashes

One of nine children born into a penniless North Dublin family, Nuala O'Faolain was saved from a harrowing childhood by her love of books and reading. Though she ultimately became one of Ireland's best-known columnists, her professional success did little to ease her loneliness and longing for a deep connection to the world. Are You Somebody? distills her experiences into a wisdom that can only come from an obstinate refusal to shrink from life.

This commemorative edition of her landmark memoir celebrates O'Faolain's remarkable life and work with a new foreword from Frank McCourt as well as additional archival materials. Strikingly vivid and starkly emotional, Are You Somebody? is, like O'Faolain herself, a singular example of courage, honesty, and bold living.


Praise For Are You Somebody?: The Accidental Memoir of a Dublin Woman…

“Are You Somebody is an extraordinary, powerful memoir. It is beautifully written, with an honesty that is both sensitive and stark.” —Roddy Doyle

Nuala O'Faolain was a waitress, sales clerk, and maid; a university lecturer; a TV producer; and a columnist with The Irish Times. The author of three consecutive New York Times bestsellers, her books include the memoir Almost There, a follow-up to Are You Somebody?, as well as two novels: My Dream of You and The Story of Chicago May. She died in Dublin in 2008.
Loading...
or support indie stores by buying on