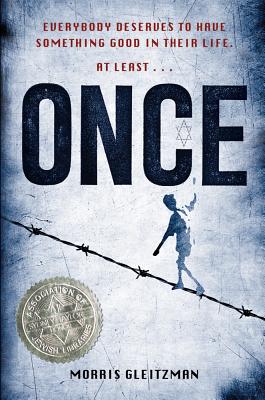 Felix, a Jewish boy in Poland in 1942, is hiding from the Nazis in a Catholic orphanage. The only problem is that he doesn't know anything about the war, and thinks he's only in the orphanage while his parents travel and try to salvage their bookselling business. And when he thinks his parents are in danger, Felix sets off to warn them--straight into the heart of Nazi-occupied Poland. To Felix, everything is a story: Why did he get a whole carrot in his soup? It must be sign that his parents are coming to get him. Why are the Nazis burning books? They must be foreign librarians sent to clean out the orphanage's outdated library. But as Felix's journey gets increasingly dangerous, he begins to see horrors that not even stories can explain.
Despite his grim suroundings, Felix never loses hope. Morris Gleitzman takes a painful subject and expertly turns it into a story filled with love, friendship, and even humor.

“Like The Boy in the Striped Pajamas (rev. 9/06), this Holocaust parable plays its main character’s naiveté against readers’ likely knowledge of the historical realities, but here the juxtaposition is believable and not at all precious; like The Book Thief (rev. 3/06), the novel extols the power of storytelling in the face of tragedy, but Once pits Felix’s stories against even deeper ugliness. ... Gleitzman manages to find a grain of hope in the unresolved (and likely dire) conclusion, but this is the rare Holocaust book for young readers that doesn’t alleviate its dark themes with a comforting ending.”—The Horn Book, Starred Review

Morris Gleitzman has been a fashion-industry trainee, frozen-chicken defroster, department-store Santa, sugar-mill employee, and screenwriter, among other things. Now he's one of Australia's best-loved children's book authors. His books have been published all over the world.
Loading...
or
Not Currently Available for Direct Purchase