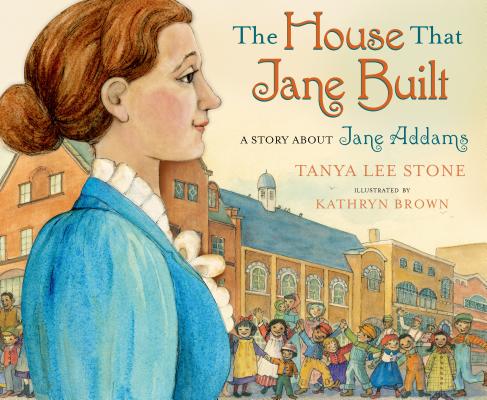 The House That Jane Built

A Story About Jane Addams

This is the story of Jane Addams, the first American woman to receive the Nobel Peace Prize, who transformed a poor neighborhood in Chicago by opening up her house as a community center.

Ever since she was a little girl, Jane Addams hoped to help people in need. She wanted to live right in the middle of the roughest, poorest communities and create a place where people could go to find food, work, and help. In 1889, she bought a house in a run-down Chicago neighborhood and turned it into a settlement home, adding on playgrounds, kindergartens, and a public bath. By 1907, Hull House included thirteen buildings. And by the early 1920s, more than 9,000 people visited Jane's home each week. An inspiration to all, Jane Addams continues to be a role model to girls and women of all ages.


Praise For The House That Jane Built: A Story About Jane Addams…

“In a moving portrayal of empathy and innovation in action, Stone and Brown convey both the significance of Addams's contributions, as well as the physical transformations of those she helped.” —Publishers Weekly, Starred Review

“Rendered in watercolor with pen and ink, the illustrations, both full bleed and spot, beautifully evoke the time period and enhance the well-researched, accessible text. . . A fine introduction to the first American female recipient of the Nobel Peace Prize” —School Library Journal

“Stone is deft with characterization:readers see the young Addams enjoying a childhood game with her stepbrother,and while no connection is articulated, this seems contiguous with her launching Chicago's first playground as an adult. . . Addams's matter-of-fact noblesse oblige is captured in Brown's handsome watercolor and pen-and-ink illustrations” —The Horn Book

“Stone capably discusses Addams' early years at Hull House, the mansion she converted into a neighborhood center and encircled with related enterprises; Brown's ink and watercolor pictures complement the hopeful tone of the text” —The Bulletin

“* A short, incisive biography. . . . The cameos of action, matched by full-page pictures, make the history accessible. A must for library shelves.” —Booklist, starred review on Elizabeth Leads the Way

Kathryn Brown is Lecturer in Modern and Contemporary Art at Loughborough University, UK. She is the author of Women Readers in French Painting 1870–1890 (2012) and (as editor and contributor) The Art Book Tradition in Twentieth-Century Europe (2013), Interactive Contemporary Art: Participation in Practice (2014) and Perspectives on Degas (2016). She has published widely on nineteenth- and twentieth-century French painting and literature. Brown is editor of the Bloomsbury series Contextualizing Art Markets.
Loading...
or support indie stores by buying on