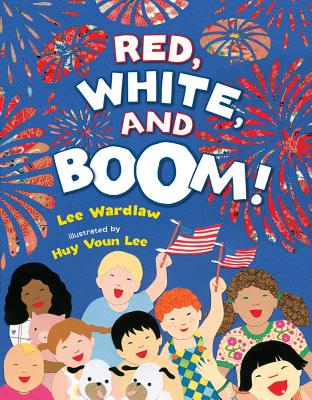 It's the Fourth of July! Travel across the country for a city parade, a beach picnic, and fireworks in the park in this poetic celebration of the many cultures and traditions that make America's birthday BOOM!


Praise For Red, White, and Boom!…

“…made to order for the summer storyhour crowd as well as quiet lapsits under a shady tree.” —School Library Journal, starred

“[A] celebration of the child-pet bond.” —Booklist, starred review on Won Ton

“Lee's mellow-hued collages feature a multicultural crowd of beach goers, while elaborate cut-outs grace the borders, echoing the fluid line of the Chinese characters. It's a remarkably unified effort: everything works together to create a flawless picture book.” —Publishers Weekly, starred review on At the Beach

“As the characters begin to build on one another, children will be able to see and appreciate the pictorial nature of Chinese writing. . . . The textured paper, vibrant winter clothing, animals in their fur and feathers, and snowflake-decorated colored borders create a lively atmosphere for this memorable lesson in Chinese writing.” —Booklist on In the Snow

HUY VOUN LEE was born in Phnom Penh, Cambodia, and moved to the United States in 1975. She has written and illustrated three other books on Chinese character writing: At the Beach, In the Snow, and In the Park. A graduate of the School of Visual Arts, Ms. Lee lives in New York City.
Loading...
or
Not Currently Available for Direct Purchase