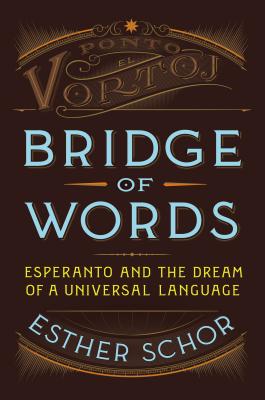 Esperanto and the Dream of a Universal Language

In 1887, Ludwig Lazarus Zamenhof, a Polish Jew, had the idea of putting an end to tribalism by creating a universal language, one that would be equally accessible to everyone in the world. The result was Esperanto, a utopian scheme full of the brilliance, craziness, and grandiosity that characterize all such messianic visions.

In this first full history of a constructed language, poet and scholar Esther Schor traces the life of Esperanto. She follows the path from its invention by Zamenhof, through its turn-of-the-century golden age as the great hope of embattled cosmopolites, to its suppression by nationalist regimes and its resurgence as a bridge across the Cold War. She plunges into the mechanics of creating a language from scratch, one based on rational systems that would be easy to learn, politically neutral, and allow all to speak to all. Rooted in the dark soil of Europe, Esperanto failed to stem the continent's bloodletting, of course, but as Schor shows, the ideal continues draw a following of modern universalists dedicated to its visionary goal.

Rich and subtle, Bridge of Words is at once a biography of an idea, an original history of Europe, and a spirited exploration of the only language charged with saving the world from itself.


Praise For Bridge of Words: Esperanto and the Dream of a Universal Language…

“Esther Schor’s lovely book describes how a tenacious group of people have dedicated themselves to an optimistic vision of harmony. It is a meditation not only on Esperanto, but on idealism itself, and it is written with resonant clarity, abiding kindness, and great compassion.”
—Andrew Solomon, author of Far From the Tree

“Esther Schor has crossed continents, tunneled under the Tower of Babel, brooded over the twentieth century’s darkest traumas and brightest dreams, and spoken endless Esperanto in an effort to understand how a language freighted with human tragedy still lives like a kiss on the lips of its speakers. This is a beautiful, mysteriously moving book by a fearless writer who set out to find the soul of a language, knowing full well that it was her own soul she was after all along.”
—Jonathan Rosen, author of Joy Comes in the Morning

“Esther Schor brings a scholar’s rigor and a poet’s ear to the astonishing, century-long story of Esperanto, from its Jewish inventor in nineteenth-century Poland to its fractious, worldwide devotees today. Tracing this utopian tale philosophically, politically, and personally, like a sympathetic yet clear-eyed analyst, she interprets the recurring dream of a universal language, revealing its meaning for our lives today.”
—Alisa Solomon, author of Wonder of Wonders

Esther Schor is the author of Emma Lazarus, which received a 2006 National Jewish Book Award, and the editor of the Cambridge Companion to Mary Shelley. Her essays and reviews have appeared in the New York Times Book Review, the Times Literary Supplement, and The Forward, among other publications. Her first collection of poems, The Hills of Holland, was a nominee for the Los Angeles Times Book Awards. A professor of English at Princeton University, Schor lives in Princeton, NJ.
Loading...
or
Not Currently Available for Direct Purchase