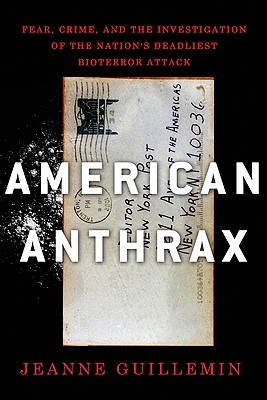 Fear, Crime, and the Investigation of the Nation's Deadliest Bioterror Attack

From Jeanne Guillemin, one of the world's leading experts on anthrax and bioterrorism, the definitive account of the anthrax investigation

It was the most complex case in FBI history. In what became a seven-year investigation that began shortly after 9/11—with America reeling from the terror attacks of al Qaeda—virulent anthrax spores sent through the mail killed Bob Stevens, a Florida tabloid photo editor. His death and, days later, the discovery in New York and Washington, D.C. of letters filled with anthrax sent shock waves through the nation. Federal agencies were blindsided by the attacks, which eventually killed five people. Taken off guard, the FBI struggled to combine on-the-ground criminal investigation with progress in advanced bioforensic analyses of the letters' contents.

While the criminal eluded justice, disinformation swirled around the letters, erroneously linking them to Iraq's WMD threat and foreign bioterrorism. Without oversight, billions were lavished on biomedical defenses against anthrax and other exotic diseases. Worst of all, faith in federal justice faltered.

American Anthrax is a gripping tale of terror, intrigue, madness, and cover-up.

Jeanne Guillemin is a senior fellow in the Security Studies Program at Massachusetts Institute of Technology, in the Center for International Studies. She is the author of "Anthrax: The Investigation of a Deadly Outbreak" and "Biological Weapons: From the Invention of State-Sponsored Programs to Contemporary Bioterrorism."

Praise For American Anthrax: Fear, Crime, and the Investigation of the Nation's Deadliest Bioterror Attack…

"A compelling and marvelously researched history. Guillemin delivers an expert account of the shock, fear, challenges and twists resulting from the 2001 anthrax attacks on America and its psyche."—The Honorable Tom Ridge, first secretary, U.S. Department of Homeland Security

"American Anthrax is a riveting read, taking us inside the complex and multilayered investigation of the anthrax letter attacks. In this 10th anniversary year of 9/11, the book is a major contribution to the debate about what security threats remain and how best to address them."—Clark Kent Ervin, former Inspector General of the Department of Homeland Security

"In this tale of a terrorist armed with germs, Jeanne Guillemin expertly reveals the complex, arduous and frustrating investigation into the anthrax letters, and the disturbing impact on America of a crime with lethal pathogens that ended without a trial or conviction."—David E. Hoffman, Pulitzer Prize-winning author of The Dead Hand: The Untold Story of the Cold War Arms Race and Its Dangerous Legacy

"Guillemin tells the story of the anthrax attacks in tantalizing detail: how our government–the Centers for Disease Control, FBI, Postal Service, and Army–responded to the anthrax cases that appeared shortly after 9/11. We now know the 2001 American anthrax came from within the US defense establishment, yet the anthrax helped willful leaders justify the invasion of Iraq. An honest and engaging account of an often misunderstood crisis."—Anthony Robbins, MD, MPA, Professor of Public Health, Tufts University and Past-President, American Public Health Association

"American Anthrax is a gripping story of a series of human tragedies at the collision of behavior, biology and bureaucracy. It underscores the crucial importance not only of public health readiness but of basic science in controlling dangerous disease outbreaks, however they emerge."—David R. Franz, former commander, USAMRIID

"American Anthrax vividly describes, in meticulous detail, the confusion and panic after lethal anthrax letters were sent through the mail in the aftermath of the attacks on the World Trade Center. Uncoordinated and often unprepared government institutions had to work together and, more difficult, learn to deal with biological forensics while confronting the combined pressures of continuing danger, public fears, and the political demands of an administration eager to make the case for foreign attack. This is a remarkable combination of history, politics, science, and psychology. A splendid book."—Philip Heymann, Professor at Harvard Law School, coauthor of Laws, Outlaws, and Terrorists, and former Deputy Attorney General