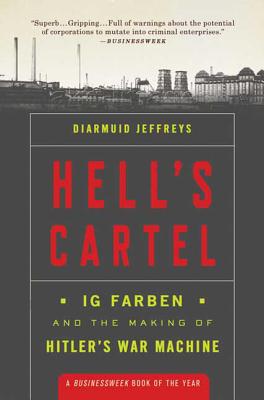 IG Farben and the Making of Hitler's War Machine

At its peak in the 1930s, the German chemical conglomerate IG Farben was one of the most powerful corporations in the world. To this day, companies formerly part of the Farben cartel—the aspirin maker Bayer, the graphics supplier Agfa, the plastics giant BASF—continue to play key roles in the global market. IG Farben itself, however, is remembered mostly for its infamous connections to the Nazi Party and its complicity in the atrocities of the Holocaust. After the war, Farben's leaders were tried for crimes that included mass murder and exploitation of slave labor.

In Hell's Cartel, Diarmuid Jeffreys presents the first comprehensive account of IG Farben's rise and fall, tracing the enterprise from its nineteenth-century origins, when the discovery of synthetic dyes gave rise to a vibrant new industry, through the upheavals of the Great War era, and on to the company's fateful role in World War II. Named one of the best books of the year by Business Week, Hell's Cartel sheds new light on the codependence of industry and the Third Reich, and offers a timely warning against the dangerous merger of politics and the pursuit of profit.


Praise For Hell's Cartel: IG Farben and the Making of Hitler's War Machine…

“A damning new history in which Jeffreys brings a rare combination of forensic acumen and narrative flair to bear on the material.” —Chicago Tribune

“Jeffreys expertly chronicles how this once-proud company descended into the abyss. It's a complex tale spanning a century and featuring a huge cast. He does a superb job of managing the material and drawing concise sketches of key figures. At almost 500 pages, this is a brisk read.” —Business Week

“Hell's Cartel is popular history at it's best.” —The Seattle Times

“Jeffreys brings a rare combination of forensic acumen and narrative flair to bear on the material.” —Bloomberg News

“An unputdownable narrative and forensically gripping investigation into how energetic German corporate executives became the degenerate monsters who made the Holocaust technically possible.” —Simon Sebag Montefiore, author of Young Stalin

“At last, a fresh and vibrant history--free from the taint of perpetrator sponsorship and corporate influence--that brilliantly chronicles the war monster I.G. Farben. Jeffreys's work will be consulted as a must for years to come.” —Edwin Black, author of Nazi Nexus: America's Corporate Connections to Hitler's Holocaust

“Behind the guns is always the money. Diarmuid Jeffreys's perfectly detailed vivisection of the IG Farben companies during the Nazi era is both sensible and powerful--thus a pleasure to read--and exceptionally compelling.” —Alan Furst, author of The Spies of Warsaw

Diarmuid Jeffreys is the author of Aspirin: The Remarkable Story of a Wonder Drug, which was nominated for the prestigious Aventis Prize for popular science books and chosen as one of the best books of the year by the San Francisco Chronicle. A journalist and documentarian, he lives in East Sussex, England.
or support indie stores by buying on