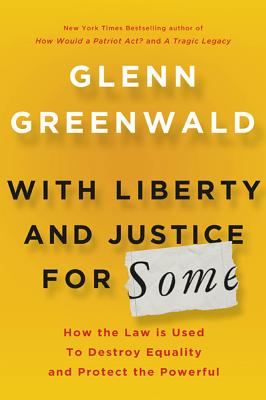 With Liberty and Justice for Some

From "the most important voice to have entered the political discourse in years" (Bill Moyers), a scathing critique of the two-tiered system of justice that has emerged in America

From the nation's beginnings, the law was to be the great equalizer in American life, the guarantor of a common set of rules for all. But over the past four decades, the principle of equality before the law has been effectively abolished. Instead, a two-tiered system of justice ensures that the country's political and financial class is virtually immune from prosecution, licensed to act without restraint, while the politically powerless are imprisoned with greater ease and in greater numbers than in any other country in the world.

Starting with Watergate, continuing on through the Iran-Contra scandal, and culminating with Obama's shielding of Bush-era officials from prosecution, Glenn Greenwald lays bare the mechanisms that have come to shield the elite from accountability. He shows how the media, both political parties, and the courts have abetted a process that has produced torture, war crimes, domestic spying, and financial fraud.

Cogent, sharp, and urgent, this is a no-holds-barred indictment of a profoundly un-American system that sanctions immunity at the top and mercilessness for everyone else.


Praise For With Liberty and Justice for Some: How the Law Is Used to Destroy Equality and Protect the Powerful…

“Greenwald lets no one off the hook in demonstrating the vast differences in legal recourse between rich and poor, powerful and weak… When the executive, judicial and legislative branches collude to avoid enforcement, lawlessness is the end result.” —Rachel Maddow

“Glenn Greenwald is not just the American Left's most fearless political commentator; his fearlessness is such that he has shifted the expectations for everyone else, too. His rock-ribbed principles and absolute disregard for partisan favor have made U.S. political discourse edgier, more confrontational, and much, much better.” —Rachel Maddow

“The first thing I do when I turn on the computer in the morning is go to Glenn Greenwald's blog to see what he said. He is truly one of our greatest writers right now.” —Michael Moore

“The most important voice to have entered the political discourse in years.” —Bill Moyers

Glenn Greenwald is the author of several bestsellers, including How Would a Patriot Act? and With Liberty and Justice for Some. Acclaimed as one of the 25 most influential political commentators by The Atlantic, one of America’s top 10 opinion writers by Newsweek, and one of the Top 100 Global Thinkers for 2013 by Foreign Policy, Greenwald is a former constitutional law and civil rights litigator. He was a columnist for The Guardian until October 2013 and is now a founding editor of a new media outlet, The Intercept.. He is a frequent guest on CNN, MSNBC, and various other television and radio outlets. He has won numerous awards for his NSA reporting, including the 2013 Polk Award for national security reporting, the top 2013 investigative journalism award from the Online News Association, the Esso Award for Excellence in Reporting (the Brazilian equivalent of the Pulitzer Prize), and the 2013 Pioneer Award from Electronic Frontier Foundation. He also received the first annual I. F. Stone Award for Independent Journalism in 2009 and a 2010 Online Journalism Award for his investigative work on the arrest and detention of Chelsea Manning. In 2013, Greenwald led the Guardian reporting that was awarded the Pulitzer Prize for public service.
or support indie stores by buying on