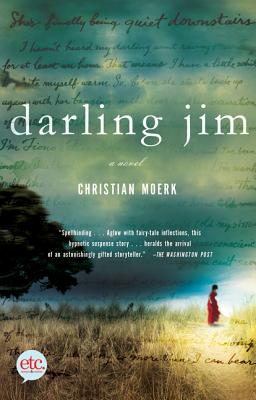 Fiona Walsh thought her family's secrets would follow her to her grave, but when her diary is found by a young postman, Niall, the truth about her untimely demise—and that of her sister and aunt—begins to see the light of day. It's the most tragic love story he's ever heard.

Niall soon becomes enveloped by the mystery surrounding Jim—an itinerant storyteller who traveled through Ireland enrapturing audiences and wooing women with his macabre mythic sagas—though a trail of murder followed him wherever he went. The Walsh sisters, fiercely loyal to each other, were not immune to "darling" Jim's powers of seduction, but found themselves in harm's way when they began to uncover his treacherous past. Niall must now continue his dangerous hunt for the truth—and for the vanished third sister—while there's still time.

And in the woods, the wolves from Jim's stories begin to gather.


Praise For Darling Jim: A Novel…

“Spellbinding. . . Aglow with fairy-tale inflections, this hypnotic, neo-Gothic suspense story unfolds like a hothouse bloom, lush and pungent; it's a sprig of nightshade, all petals and poison. And it heralds the arrival of an astonishingly gifted storyteller. . . Sly, wry and utterly original.” —Daniel Mallory, The Washington Post

“Moerk, a former film executive, would do very well carrying on the seanchaí tradition in any dark, cozy Irish pub. He weaves a creepy, entertaining, sometimes outlandish tale about the perils of loving the wrong guy. A chilling bedtime story for adults.” —People (three stars)

“Christian Moerk . . . writes the best novel I've read in more than a year. . . I recommend this exotic book to all readers - not as 'just a mystery' but as a superb and inventive literary tour-de-force.” —Cleveland Plain Dealer (Grade: A)

“Enthralling. . . . Moerk shows how the various forms of storytelling--myths, fairy tales, horror and crime fiction--each have the strength to entertain, to reflect society's concerns and to show people at their best and worst.” —Oline H. Cogdill, Florida Sun Sentinel

“Darling Jim is wickedly good. From its shocking beginning to the unwinding stories of three sisters, the tale spirals like a Celtic knot, wending back into authentic Irish folklore and forward into the modern world where storytellers have a dangerous charm. A page-turner of the highest sort.” —Keith Donohue, author of The Stolen Child

“A dark, seductive fairy tale of a book. Christian Moerk is a thrilling storyteller.” —Gillian Flynn, author of Sharp Objects

“Darling Jim is a delicious, dangerous and very original story within a story, exactly what I love to read.” —Pam Lewis, author of Speak Softly, She Can Hear and Perfect Family

Christian Moerk has always told stories. Born into a family of actors, he realized when he was quite young that he’d rather tell the tales himself than interpret other people’s words on stage. But he sucked in the words. From Richard III to Faust.

So he next went to New York City, where he spent enough time riding along with the police department and the ambulance services, and scouring the darkest alleyways he could find to attain his master’s degree in 1992 from the Columbia Graduate School of Journalism. He was awarded the Henry N. Taylor Award as the best foreign student in his class for his thesis “Alien Nation,” which dealt with the lives of illegal Irish immigrants in New York. He began formulating ideas for a book. But it still wasn’t ready to tell it.

Before he could work on it, he got a job at Variety, the entertainment industry’s trade paper of record, where he first covered independent and European film before moving to Los Angeles. Once there, he was quickly headhunted by Warner Bros. Pictures then-President of production Bruce Berman, who gave him the chance to learn the movie production trade. He was given an office on the Warner lot, and couldn’t believe it.

For the next several years, Christian was awash in stories – but they were still other people’s stories. He was involved in the production of small art pictures, such as Neil Jordan’s Michael Collins and The Butcher Boy, and also held a hand in the making of bigger blockbusters like Eraser, The Devil’s Advocate, and Outbreak.

Christian moved back to New York City, and began to write stories for The New York Times, interviewing directors like Wes Anderson (Darjeeling Limited) and Bennett Miller (Capote), while preparing to make the leap from journalist to novelist.

A story kept tapping him on the shoulder. He rummaged through his old files and found a yellowed newspaper clipping he’d kept from years back. It was an article detailing the strange and mysterious death of three nieces and their aunt, who were found in their suburban house in Ireland after months of living like shut-ins.

From there, Christian imagined a different story, in which the tragic end in that house was merely the conclusion of a gothic love story that began in a tiny fishing village on Ireland’s ragged, beautiful western coast. And he finally began to write his own words.

Darling Jim swept the Danish critics in September of 2007, selling more than 38,000 copies there to date, with rights sold to thirteen other countries, so far. It reached number four on the local bestseller list. His genre is best described as intelligent suspense with an emotional core.