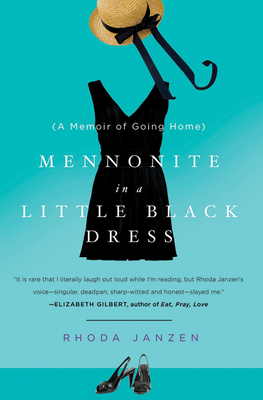 Mennonite in a Little Black Dress

A Memoir of Going Home

“Poet Rhoda Janzen has an intriguingly honest and witty way with language, and a personality and unique story to match. This insightful memoir is simultaneously humorous and touching -- a rare combination you certainly don't want to miss.”
— Kerry Hartwick, The Velveteen Rabbit Bookshop, Fort Atkinson, WI
View the List

"It is rare that I literally laugh out loud while I'm reading, but Janzen's voice—singular, deadpan, sharp-witted and honest—slayed me." —Elizabeth Gilbert, author of Eat, Pray, Love

Not long after Rhoda Janzen turned forty, her world turned upside down. It was bad enough that her husband of fifteen years left her for Bob, a guy he met on Gay.com, but that same week a car accident left her injured. Needing a place to rest and pick up the pieces of her life, Rhoda packed her bags, crossed the country, and returned to her quirky Mennonite family's home, where she was welcomed back with open arms and offbeat advice. (Rhoda's good-natured mother suggested she get over her heartbreak by dating her first cousin—he owned a tractor, see.)

Written with wry humor and huge personality—and tackling faith, love, family, and aging—Mennonite in a Little Black Dress is an immensely moving memoir of healing, certain to touch anyone who has ever had to look homeward in order to move ahead.


Praise For Mennonite in a Little Black Dress: A Memoir of Going Home…

“This book is not just beautiful and intelligent, but also painfully -- even wincingly -- funny. It is rare that I literally laugh out loud while I'm reading, but Rhoda Janzen's voice -- singular, deadpan, sharp-witted and honest -- slayed me, with audible results. I have a list already of about fourteen friends who need to read this book. I will insist that they read it. Because simply put, this is the most delightful memoir I've read in ages.” —Elizabeth Gilbert, author of Eat, Pray, Love

“This is an intelligent, funny, wonderfully written memoir. Janzen has a gift for following her elegant prose with the perfect snarky aside. If it weren't for the weird Mennonite food, I would like very much to be her friend.” —Cynthia Kaplan, author of Why I'm Like This and Leave the Building Quickly

Rhoda Janzen is the author of Mennonite in a Little Black Dress: A Memoir of Going Home, as well as Babel's Stair, a collection of poems. Her poems have also appeared in Poetry, The Yale Review, The Gettysburg Review, and The Southern Review.  She holds a PhD from the University of California, Los Angeles, where she was the University of California Poet Laureate in 1994 and 1997. She teaches English and creative writing at Hope College in Holland, Michigan.