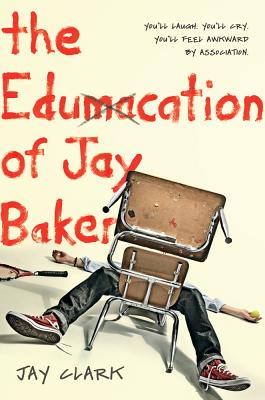 The Edumacation of Jay Baker

A few "sexy" bullet points about Jay: He is in love with a cheerleader named Cameo "Appearance" Parnell
He is forever losing "Love-15" to tennis-playing goddess Caroline Richardson
He rocks a touche array of pop-culture references, jokes, and puns
His family-life cookie is about to crumble.
Live vicariously through Jay as he faces off against his mortal enemy, gets awkward around his dream girl(s), loses his marbles in a Bermudian love triangle, watches his parents' relationship implode, and, finally, learns to get real and be himself(ish).

Praise For The Edumacation of Jay Baker…

“Readers eager to give both their hearts and their brains an energetic work-out will enjoy this mash-up…”--BCCB “Jay’s smarts, originality, and warmth make the old teen trope of the hot girl(s) falling for the doofus guy actually believable.”--Booklist, Starred Review

Jay Clark has written essays and articles for The Washington Post and Tennis magazine. A former resident of Ohio, he now lives in Virginia. The Edumacation of Jay Baker is his debut young adult novel.
Loading...
or
Not Currently Available for Direct Purchase