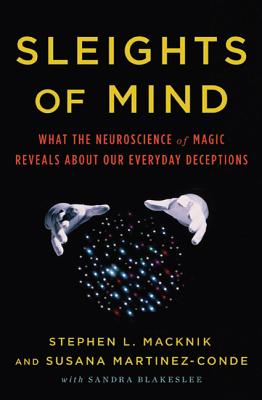 What the Neuroscience of Magic Reveals about Our Everyday Deceptions

Stephen Macknik and Susana Martinez-Conde, the founders of the exciting new discipline of neuromagic, have convinced some of the world's greatest magicians to allow scientists to study their techniques for tricking the brain. This book is the result of the authors' yearlong, world-wide exploration of magic and how its principles apply to our behavior. Magic tricks fool us because humans have hardwired processes of attention and awareness that are hackable a good magician uses your mind's own intrinsic properties against you in a form of mental jujitsu.

Now magic can reveal how our brains work in everyday situations. For instance, if you've ever bought an expensive item you'd sworn you'd never buy, the salesperson was probably a master at creating the "illusion of choice," a core technique of magic. The implications of neuromagic go beyond illuminating our behavior; early research points to new approaches for everything from the diagnosis of autism to marketing techniques and education. "Sleights of Mind" makes neuroscience fun and accessible by unveiling the key connections between magic and the mind.


Praise For Sleights of Mind: What the Neuroscience of Magic Reveals about Our Everyday Deceptions…

"Magic is the place where our senses and beliefs fail us in magnificent ways. In this exciting book Stephen, Susana, and Sandra explore what magic and illusions can teach us about our fallible human nature—coming up with novel and fascinating observations."—Dan Ariely, author of Predictability Irrational

"Steve and Susana are two of the most innovative scientists I know. They aren't content to just conduct elegant experiments (although they do plenty of those, too). Instead, they're determined to explore those places where neuroscience intersects the mysterious and the magical, from visual illusions to Vegas card tricks. This book doesn't just change the way you think about sleight of hand and David Copperfield - it will also change the way you think about the mind."—Jonah Lehrer, author of How We Decide and Proust Was A Neuroscientist.

"I've long wished that there was a book that explained the art of magic from the point of view of cognitive neuroscience. Magic is a goldmine of information about the brain, as well as a source of fascination to laypeople. This is the book we've all been waiting for."—Steven Pinker PhD, author of The Stuff of Thought

"This is a highly original book. Science and magic have much in common. They both take seemingly inexplicable events and provide elegantly simple answers that enthrall the observer. The authors have done an admirable job in exploring this idea and also suggest ways in which the two disciplines can cross fertilize each other."—VS Ramachandran MD PhD, author of Phantoms in the Brain

"Stephen Macknik and Susana Martinez-Conde's Sleights of Mind gives non-magicians a real up-close look at the true secrets of magic. They are revealing the real knowledge jealously guarded by all great performers...I know my fellow magicians are all going to be as jazzed as I am to read about how sophisticated magical techniques and state-of-the-art brain science combine."—Mac King, headliner, Harrah's Las Vegas

"In Sleights of Mind, authors Stephen Macknik and Susana Martinez-Conde persistently remind us that the human mind is a bad data-taking device. And it's this fact that enables the science of magic to exist at all."—Neil deGrasse Tyson, author of The Pluto Files

"In their illuminating book, brain experts Martinez-Conde and Macknik make their case that magicians are some of the most skilled neuroscientists around...By tricking readers into having fun learning neuroscience, the authors bring the newly minted field of "neuromagic" to center stage."--Laura Sanders, Science News

"This book offers 'a revolutionary look a the science behind magic--what leads the mind to believe tricks are real and how magicians actually use the brain's own logic to acheive this.'"--Phillip Manning, Science Book News

"Sleights of Mind makes brain science so much fun, you’ll swear the authors are as clever as Houdini."--Scientific American Book Club

"If you want to learn more about "neuromagic," take a peek at Macknik and Martinez-Conde's most recent book. It explains how they've investigated the tricks of some of the world's greatest magicians to find out how the brain works in everyday situations. It's a great read whether you're passionate about brain science, magic, or both!"--Odyssey Magazine (Editor's Choice)

Stephen L. Macknik, Ph.D., is Director of the Laboratory of Behavioral Neurophysiology at the Barrow Neurological Institute in Phoenix, Arizona. Susana Martinez-Conde, Ph.D., is Director of the Laboratory of Visual Neuroscience at BNI. Sandra Blakeslee is a regular contributor to "Science Times" at The New York Times who specializes in the brain sciences, and the author of several books.
Loading...
or
Not Currently Available for Direct Purchase