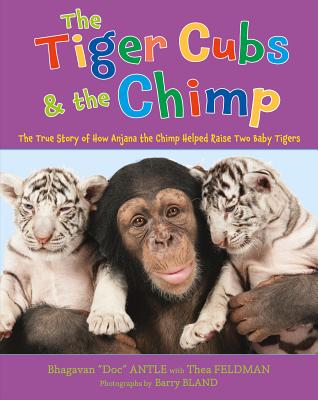 The Tiger Cubs and the Chimp (Hardcover)

When two baby white tigers on an animal preserve get into trouble during a storm, they are taken in by a human animal worker named China and her helper, a chimpanzee named Anjana. China and Anjana soon become the tigers' mothers, playing and cuddling with the cubs as they grow big and strong.

Bhagavan “Doc” Antle is the founder and director of T.I.G.E.R.S. (The Institute for Greatly Endangered and Rare Species) and the RSF (Rare Species Fund). He is widely recognized as one of the foremost wildlife conservationists in the world.

Thea Feldman has written and edited hundreds of children’s books, including Suryia and Roscoe and Suryia Swims!, which she co-authored with Dr. Bhagavan Antle. She has also worked at the Wildlife Conservation Society where she researched and wrote about the animals in the Society's five urban wildlife parks in New York City. She is a former editorial director at Scholastic.

Bhagavan “Doc” Antle is the founder and director of T.I.G.E.R.S. (The Institute for Greatly Endangered and Rare Species) and the RSF (Rare Species Fund). He is widely recognized as one of the foremost wildlife conservationists in the world.

Barry Bland’s work has been published in hundreds of national newspapers and magazines around the world. He photographed Dr. Bhagavan Antle and Thea Feldman's The Tiger Cubs and the Chimp, among other books.

Praise For The Tiger Cubs and the Chimp: The True Story of How Anjana the Chimp Helped Raise Two Baby Tigers…

“Following the same clean photo-album layout as Suryia & Roscoe (2011) (Suryia makes an appearance with Mitra and Shiva too), with simple sentence structure, this is engaging nonfiction for the youngest set. An author's note explains how the animal-preserve setting fostered this relationship.” —Kirkus Reviews

“The endearing photographs might well make you want to go out and save an orangutan--or a stray pup.” —Los Angeles Times on Suryia and Roscoe

“The engaging animals will appeal to children.” —School Library Journal on Suryia and Roscoe

“Fans of cute animal books will be delighted.” —Booklist on Suryia and Roscoe

“Will bring smiles to the faces of animal lovers young and old.” —Kirkus Reviews on Suryia Swims!

“Fans of Suryia . . . will surely enjoy this continuation into the life of a very special orangutan.” —School Library Journal on Suryia Swims!