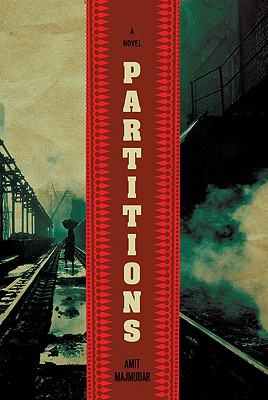 A stunning first novel, set during the violent 1947 partition of India, about uprooted children and their journeys to safety

As India is rent into two nations, communal violence breaks out on both sides of the new border and streaming hordes of refugees flee from blood and chaos.

At an overrun train station, Shankar and Keshav, twin Hindu boys, lose sight of their mother and join the human mass to go in search of her. A young Sikh girl, Simran Kaur, has run away from her father, who would rather poison his daughter than see her defiled. And Ibrahim Masud, an elderly Muslim doctor driven from the town of his birth, limps toward the new Muslim state of Pakistan, rediscovering on the way his role as a healer. As the displaced face a variety of horrors, this unlikely quartet comes together, defying every rule of self-preservation to forge a future of hope.

A dramatic, luminous story of families and nations broken and formed, Partitions introduces an extraordinary novelist who writes with the force and lyricism of poetry.

“A superb fiction debut ... particularly welcome. This novel will make you angry and sad, as it should; it will also leave you with a heightened sense of sympathy and hope for all people on both sides of an arbitrary border.”
—The Wall Street Journal


“Shimmering prose... and a poignant surprise ending.”
—The Seattle Times

“This first-time novelist has helped us to travel that brief but crucial distance, from words on the page to dreams in our minds and hearts, and made this bitter, brutal time somehow reachable.”
—NPR, All Things Considered

“Eloquently shares its author’s humane insights… A worldly meditation on the violence that occurs because of the necessary yet artificial partitions between individuals.”
—San Francisco Chronicle

“A greatly human dramatization of the persecution each religious group experienced at the hands of the others... Poignant but never maudlin.”
—Booklist (starred review)

Amit Majmudar is a diagnostic nuclear radiologist and an award-winning poet whose work has been featured in "The Best American Poetry 2007." His first poetry collection, "0, 0," was published in 2009, and a novella, "Azazel," was serialized in "The Kenyon Review." "Partitions" is his first full-length novel. He lives in Columbus, Ohio.