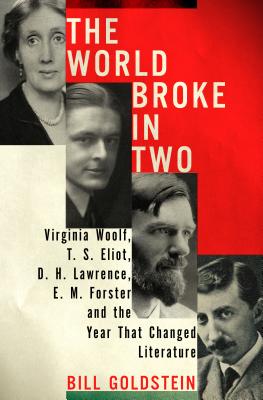 The World Broke in Two

A revelatory narrative of the intersecting lives and works of revered authors Virginia Woolf, T. S. Eliot, E. M. Forster and D. H. Lawrence during 1922, the birth year of modernism

The World Broke in Two tells the fascinating story of the intellectual and personal journeys four legendary writers, Virginia Woolf, T. S. Eliot, E. M. Forster, and D. H. Lawrence, make over the course of one pivotal year. As 1922 begins, all four are literally at a loss for words, confronting an uncertain creative future despite success in the past. The literary ground is shifting, as Ulysses is published in February and Proust’s In Search of Lost Time begins to be published in England in the autumn. Yet, dismal as their prospects seemed in January, by the end of the year Woolf has started Mrs. Dalloway, Forster has, for the first time in nearly a decade, returned to work on the novel that will become A Passage to India, Lawrence has written Kangaroo, his unjustly neglected and most autobiographical novel, and Eliot has finished—and published to acclaim—“The Waste Land."

As Willa Cather put it, “The world broke in two in 1922 or thereabouts,” and what these writers were struggling with that year was in fact the invention of modernism. Based on original research, Bill Goldstein's The World Broke in Two captures both the literary breakthroughs and the intense personal dramas of these beloved writers as they strive for greatness.

“A fascinating and engrossing tale . . . This is Goldstein’s own personal triumph: he creates an original, moving and at times wryly amusing account of four literary demi-gods during the course of these few months that shaped a new direction in English literature, incorporating a wealth of detail which builds, layer upon layer, until the picture is satisfyingly complete.” —Times Literary Supplement

“An indispensable guide to four legendary writers who were largely responsible for the creation of modern literature . . . [Goldstein] presents these illuminating portraits with some masterly craftsmanship of his own . . . At the end, The World Broke in Two is invaluable.” —The National Book Review

“An extensively researched, extraordinarily fine-grained and lucid literary history rich in biographical discoveries…Goldstein’s ardently detailed, many-faceted story of a pivotal literary year illuminates all that these tormented visionaries had to overcome to ‘make the modern happen.’” —Booklist

“[An] accomplished, captivating look at that seminal year through the lens of the interconnecting lives of four literary icons…Impressively rich and nuanced…[Goldstein’s] evenhanded passion for each of his subjects plays out in an elegant narrative. In our own fractured, impatient age, the poignant and arresting stories of these four genius writers evoke nostalgia for a time when precision and introspection were the guiding principles of literature. The World Broke in Two beautifully captures a seismic moment of cultural rupture that, despite its shock and awe, left something new and exciting in its path.” —BookPage

“The ingenious conceit of Goldstein’s book is to follow, using excerpts from both their correspondence and their diaries, the intertwined personal and literary lives of four writers—Virginia Woolf, D. H. Lawrence, E. M. Forster, and Eliot himself—as the three seismic shocks of those publications ripple through their lives, and their work…In letting these four writers speak in their own words—their own witty, gossipy, often waspish words—Goldstein neatly avoids a dutiful chronicling of anything so weighty and abstruse as The Rise of Modernism. Cannily, he sacrifices historical sweep and gravitas for something much more grounded and intimate. In his hands, these literary lions prove surprisingly—and bracingly—catty.” —NPR

"Engaging and very well researched....Goldstein’s insightful and graceful prose reveals four authors during troubled moments of their careers, and he is fortunate in having a trove of writings from which to draw....This year-in-the-life chronicle gives us a remarkable look at the gestation of literature." —Minneapolis Star-Tribune

“Candy for those who have a taste for literary history…Goldstein splits his focus between the writers’ work and their intertwined lives, offering drama, cultural insight and a good dose of pure fun.” —The Forward

“An extensively annotated account of how four major authors invented modernism in 1922…The intimate peek into the lives, rivalries, and heartbreaks of these celebrated writers sustains an entertaining story about how great literature is made, and will please scholars and hardcore fans alike.” —Publishers Weekly

“What a masterpiece this book is! So captivating, so original, so full of energy, insights and analysis! Bill Goldstein's brilliant work will be read with great pleasure not only by those who think they already know his famous subjects, but by all readers who love history and biography.” —Doris Kearns Goodwin, author of Team of Rivals and The Bully Pulpit

“The World Broke in Two is more fun to read than it has any right to be. Its subject – the overlapping neuroses, illnesses, and inspirations of four 20th Century greats – would seem familiar territory. But Bill Goldstein is such a companionable writer and his narrative is so full of telling detail that we encounter each of these writers anew. The result is a book that anyone interested in the vicissitudes of the writing life– then or now – will read with hunger. Like all good accounts of writing, it draws us back to the books themselves.” —Adam Haslett, author of Imagine Me Gone

“The World Broke in Two is a gem of collective – and interwoven – biography. Like the great modernists of fiction, Bill Goldstein pays keen imaginative attention to simultaneity; he surveys the literary landscape, and these four great peaks upon it, as if he were the pilot flying that famous airplane over Mrs.Dalloway. The reader is made to see the writers – paused, burgeoning, and on the brink – in strong relationship to one another. The result is a view and vision we've not had before.” —Thomas Mallon, author of Yours Ever: People and Their Letters

“The year 1922 was indeed “a grrrreat littttterary period,” as Ezra Pound wrote to T. S. Eliot, and as Bill Goldstein demonstrates in this stunningly written, riveting day-by-day account of how four of the world's most beloved writers created their greatest works. He provides new insight into the relationships among writers we thought we knew. How heartening this book will be to readers and to writers – it was to me – to realize that even Virginia Woolf, T. S. Eliot, E. M. Forster, and D. H. Lawrence experienced self-doubts, envy, and all kinds of other challenges, and that they simply had to plow through them and get their work done. The World Broke in Two brilliantly illuminates the adventure that is the creative process.” —Sherill Tippins, author of February House and Inside the Dream Palace:The Life and Times of New York's Legendary Chelsea Hotel

“Bill Goldstein, a wizard of words, has gifted us with a magical brew. Profoundly researched and filled with stunning connections, The World Broke in Two is brilliant, compelling, incisive. It transforms our understanding of modern literature, and the creative relationships of Virginia Woolf, T.S. Eliot, D.H.Lawrence, and E.M. Forster. Everyone interested in history, literature, life will enjoy and benefit from this dazzling work.” —Blanche Wiesen Cook, author, Eleanor Roosevelt, Volumes I, II, and III.

“This is a brilliant book about the birth of modernism, one which taught me something on every page. I never knew what a life-changing influence Proust had on Virginia Woolf and E.M. Forster – or how everyone struggled with money, especially T. S. Eliot. This beautifully written book reveals how artistic innovation occurs in the real world of gossip, love affairs, poverty and class differences. You will feel – and be! – much smarter after you read it.” —Edmund White, author of Proust

“[Bill Goldstein] makes a solid case for 1922 as the climacteric in which the modern era began—modern, that is to say, in the sense of literary and artistic modernism…[he] writes assuredly and well of the work of his chosen four exemplars…he brings fresh eyes to all of them…engaging.” —Kirkus Reviews

Bill Goldstein, the founding editor of the books site of The New York Times on the Web, reviews books and interviews authors for NBC's "Weekend Today in New York." He is also curator of public programs at Roosevelt House, the public policy institute of New York's Hunter College. He received a PH.D in English from City University of New York Graduate Center in 2010, and is the recipient of writing fellowships at MacDowell, Yaddo, Ucross and elsewhere. Bill is the author of The World Broke in Two: Virginia Woolf, T. S. Eliot, D. H. Lawrence, E. M. Forster and the Year that Changed Literature.
Loading...
or
Not Currently Available for Direct Purchase