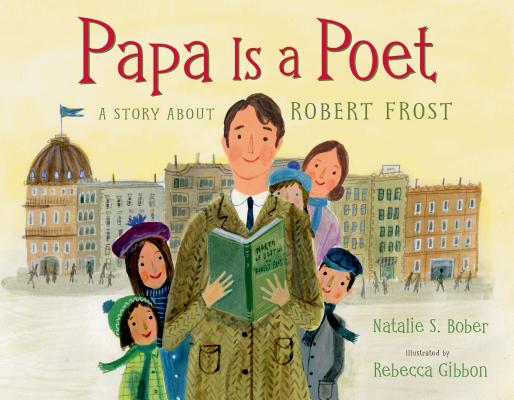 Papa Is a Poet

A Story About Robert Frost

Papa Is a Poet: is a picture book about the famous American poet Robert Frost, imagined through the eyes of his daughter Lesley.

When Robert Frost was a child, his family thought he would grow up to be a baseball player. Instead, he became a poet. His life on a farm in New Hampshire inspired him to write "poetry that talked," and today he is famous for his vivid descriptions of the rural life he loved so much. There was a time, though, when Frost had to struggle to get his poetry published. Told from the point of view of Lesley, Robert Frost's oldest daughter, this is the story of how a lover of language found his voice.


Praise For Papa Is a Poet: A Story About Robert Frost…

“Frost's poems are smoothly interspersed throughout the story, as well as collected at the end of this contemplative tribute.” —Publishers Weekly

“Photos, quotations, a short bibliography, and a dozen of Frost's poems are appended. Charming, detailed folk-art-style watercolor paintings add to the appeal of this readable introduction to a great American poet.” —School Library Journal

“A likable introduction to Frost as a father, farmer and poet who took the road "less traveled" from the engaging perspective of his oldest daughter.” —Kirkus Reviews

“Bober successfully portrays the four-time Pulitzer Prize winner as a very human schoolboy, husband, father, farmer, and teacher. She stresses Frost's determination and Yankee spirit, but also gives glimpses of his darker side--the anger, the depression, the suicidal bent. The clear and straightforward text is interwoven with poetry.” —School Library Journal on A Restless Spirit

“The sometimes informational tone is animated and energized by Gibbon's plentiful vignettes and paintings, rendered in a vibrant folk-art style.” —Publishers Weekly on Rebecca Gibbon's illustrations in Elizabeth Leads the Way

“Gibbon's acrylic-ink, colored-pencil, and watercolor artwork creates an inviting look throughout the book.” —Booklist on Rebecca Gibbon's illustrations in Celebritrees

Natalie S. Bober is an award-winning biographer and historian who has written about Thomas Jefferson, Abigail Adams, and William Wordsworth, among others. She is the author of A Restless Spirit: The Story of Robert Frost. She lives in Port Washington, New York.

Rebecca Gibbon is the illustrator of several picture books, including Elizabeth Leads the Way, which was named an ALA Notable Book among other honors. She lives in England with her husband and two young children.
Loading...
or
Not Currently Available for Direct Purchase