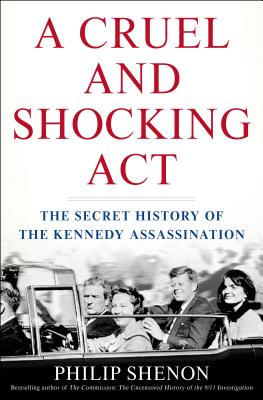 A Cruel and Shocking Act

The Secret History of the Kennedy Assassination

A groundbreaking, explosive account of the Kennedy assassination that will rewrite the history of the 20th century's most controversial murder investigation

The questions have haunted our nation for half a century: Was the President killed by a single gunman? Was Lee Harvey Oswald part of a conspiracy? Did the Warren Commission discover the whole truth of what happened on November 22, 1963?

Philip Shenon, a veteran investigative journalist who spent most of his career at The New York Times, finally provides many of the answers. Though A Cruel and Shocking Act began as Shenon's attempt to write the first insider's history of the Warren Commission, it quickly became something much larger and more important when he discovered startling information that was withheld from the Warren Commission by the CIA, FBI and others in power in Washington. Shenon shows how the commission's ten-month investigation was doomed to fail because the man leading it – Chief Justice Earl Warren – was more committed to protecting the Kennedy family than getting to the full truth about what happened on that tragic day. A taut, page-turning narrative, Shenon's book features some of the most compelling figures of the twentieth century—Bobby Kennedy, Jackie Kennedy, Lyndon Johnson, J. Edgar Hoover, Chief Justice Warren, CIA spymasters Allen Dulles and Richard Helms, as well as the CIA's treacherous "molehunter," James Jesus Angleton.

Based on hundreds of interviews and unprecedented access to the surviving commission staffers and many other key players, Philip Shenon's authoritative, scrupulously researched book will forever change the way we think about the Kennedy assassination and about the deeply flawed investigation that followed.
A Washington Post Notable Nonfiction Book of 2013


Praise For A Cruel and Shocking Act: The Secret History of the Kennedy Assassination…

“Jaw-dropping scenes involving the destruction and manipulation of evidence... A persuasive, deeply researched account… A compelling read.” —The Washington Post

“A Cruel and Shocking Act has authority, is tantalizingly readable and is convincing in its claim that the Warren Commission was unable or unwilling to uncover the total truth. [Shenon's] work, I submit, is the one to read.” —The Wall Street Journal

“Remarkable…I've become convinced that, 50 years after the act, a real reporter--not some chat-room know-it-all--has through actual, on the ground, person-to-person investigation, through nonstop digging, tugging at the tangled heart of the mystery, brought us to the brink of answer. An achievement that, I believe, merits the Pulitzer Prize and the thanks of a grateful nation.” —Slate.com

“[A Cruel and Shocking Act] contains a number of startling facts… [and] juicy and informative details that shed new light on the JFK investigation…. The book reveals how the investigation was immediately taken over by the very government agencies -- the CIA, FBI and Secret Service -- that had the most to hide when it came to the assassination…. A remarkable story.” —David Talbot, Salon.com

“A judicious account of the Warren Commission, as recalled by the lawyers who did its legwork. A.” —Entertainment Weekly

“[A] masterful piece of modern history… A work fit to rank alongside the previous masterpiece of the murder, William Manchester's Death of A President... Gripping.” —The Independent (United Kingdom)

“I love this book. It is a terrific read.” —Lou Dobbs, Lou Dobbs Tonight

“Impressive… [Shenon] documents the extent to which agencies and actors in those days withheld and even destroyed information that should have gone to the Warren Commission.” —Peggy Noonan, Wall Street Journal

“A Cruel and Shocking Act may be the best of the big-anniversary crop of books about the assassination – a tour de force of good reporting and excellent storytelling about an event that continues to defy clean and final resolution, 50 years later.” —The Journal Gazette (Fort Wayne, Indiana)

“A thorough, fascinating and highly readable record of the details of the murder of John F. Kennedy in Dallas in 1963.... One of the more impressive offerings in the 50th-year anniversary of that watershed event.” —Bookreporter.com

“Sober and powerful…Shenon, a former New York Times reporter, affords the reader access to the behind-the-scenes deliberations and dynamics that shaped a historic inquiry into a national trauma.” —Publishers Weekly

“Startling… Shenon has helped us get further than we've been before.” —Kirkus Reviews

Philip Shenon, the bestselling author of The Commission: The Uncensored History of the 9/11 Investigation, was a reporter for The New York Times for more than twenty years. As a Washington correspondent for The Times, he covered the Pentagon, the Justice Department and the State Department. He lives and writes in Washington, DC.
Loading...
or
Not Currently Available for Direct Purchase