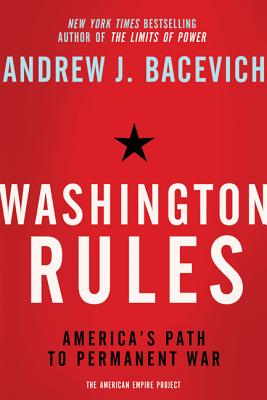 "Tough-minded, bracing, and intelligent . . . the country is lucky to have a fierce, smart peacemonger like Bacevich."—The New York Times Book Review

Hailed as "brilliant" (The Washington Post), Washington Rules is Andrew J. Bacevich's bestselling challenge to the conventional wisdom that American security requires the United States (and us alone) to maintain a permanent armed presence around the globe, to prepare our forces for military operations in far-flung regions, and to be ready to intervene anywhere at any time. Adopted by administrations on both sides of the political spectrum during the past half century, this Washington consensus on national security has become foreign policy gospel when, according to Bacevich, it has outlasted its usefulness.

With vivid, incisive analysis, Bacevich assails and exposes the preconceptions, biases, and habits that underlie this pervasive faith in military might, especially the notion that overwhelming superiority will oblige others to accommodate America's needs and desires—whether for cheap oil, cheap credit, or cheap consumer goods. Instead, Bacevich argues that we must reconsider the principles which shape American policy in the world and acknowledge that fixing Afghanistan should not take precedence over fixing Detroit. As we enter a period when our militarism has become both unaffordable and increasingly dangerous, replacing this Washington consensus is crucial to America's future and may yet offer the key to the country's salvation.

Andrew Bacevich is the author of The Limits of Power, Washington Rules, and The Age of Illusions: How America Squandered Its Cold War Victory. His writings have appeared in The New York Times, the London Review of Books, and the American Conservative, among other publications. Having served in the army for twenty-three years, he is currently a professor emeritus of history and international relations at Boston University and founder and president of the Quincy Institute for Responsible Statecraft, a Washington think tank dedicated to foreign policy. He lives in Walpole, Massachusetts.
Loading...
or
Not Currently Available for Direct Purchase