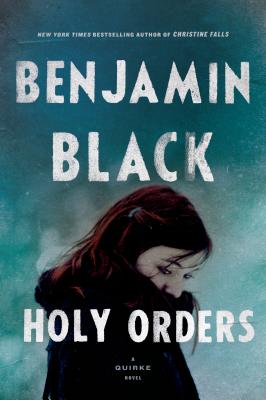 So begins Holy Orders, the latest Quirke case set in Dublin at a moment when newspapers are censored, social conventions are strictly defined, and appalling crimes are hushed up. Why? Because in 1950s Ireland the Catholic Church controls the lives of nearly everyone. But when Quirke's daughter Phoebe loses her close friend Jimmy Minor to murder, Quirke can no longer play by the Church's rules. Along with Inspector Hackett, his sometime partner, Quirke investigates Jimmy's death and learns just how far the Church and its supporters will go to protect their own interests.

Haunting, fierce, and brilliantly plotted, this is Benjamin Black writing at the top of his form. His inimitable creation, the endlessly curious Quirke, brings a pathologist's unique understanding of death to unlock the most dangerous of secrets.

"Absorbing… The murder mystery is solved, after its startling fashion, in due time—but not before Mr. Black has worked his lyrical magic at fine length, in scenes that unfold with a poet's grace.… Long may we wander Dublin's damp streets in the dour doctor's melancholy presence."—The Wall Street Journal"Sophisticated… Banville is arguably one of the finest prose stylists writing in English today."—The Atlantic Wire

"It is doubtful that anyone can write as well as Benjamin Black when it comes to a psychological mystery... And it is significant that the silken skill with which he writes of past and present death matches the literary talent that marked the author in his incarnation as John Banville, winner of the Man Booker Prize."—The Washington Times

"[Holy Orders] starts and ends as strongly as the best of the Quirkes...This book may well introduce many readers to the series, as it is sure to get major attention ﻿this year when the BBC airs in Great Britain its production of Black’s work. It stars Gabriel Byrne as Black’s protagonist, the dour, self-hating, sometimes alcoholic pathologist, Quirke, in 1950s Dublin."—St. Louis Post-Dispatch

"Outstanding . . . Black (nom de plume for the Quirke books by acclaimed Irish author John Banville) has turned in his most complex plot yet in Holy Orders, the sixth book in this 1950s-Dublin-set series."—The Star-Ledger (New Jersey)

"Banville’s knack for drawing the reader in with a good story remains forcefully intact."—The Daily Beast

"Black masterfully evokes an Ireland in the iron grip of Mother Church…Quirke, a product of his environment, is a fascinating character."—Washington Independent Review of Books

"Black breaks out of the pack . . . The latest book, Holy Orders, is just out. It’s an excellent addition to the series, opening with the murder of a reporter, a friend of sorts with Quirke’s daughter in previous books . . . Black is an excellent host."—WBUR (Boston NPR)

"Deceit, suspicion, jealousy, doubt: Banville and Black join, through Quirke and Phoebe, the ageless concerns of storytellers. Holy Orders freshens them. May my lack of plot details encourage you to encounter their treatment for yourself, for their evocation proves this to be the most powerful Quirke novel yet."—Pop Matters

"Strikingly detailed, psychologically intricate . . . Black succeeds brilliantly in delivering piquant social satire and chilling revelations of the church’s unholy power of the justice system and the press."—Booklist"The solid detecting. . .will keep readers engaged, but the book’s power stems from its multifaceted lead."—Publishers Weekly"A turning point in the series . . . While mortality permeates the novel, its real mystery is the mind of Quirke . . . For Black, the mystery of the human condition remains impenetrable."—Kirkus Reviews"Even if Gabriel Byrne weren’t starring in a new BBC series based on the Quirke novels by Benjamin Black (John Banville’s alter ego), fans will be clamoring for this latest in the popular series."— Library Journal ("Barbara’s Picks" for August 2013 fiction)

Benjamin Black is the pen name of the Man Booker Prize-winning novelist John Banville. The author of the bestselling and critically acclaimed series of Quirke novels--including Christine Falls, A Death in Summer, and Vengeance--he lives in Dublin.
Loading...
or
Not Currently Available for Direct Purchase