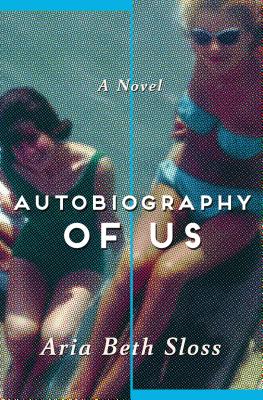 A gripping debut novel about friendship, loss and love; a confession of what passed between two women who met as girls in 1960s Pasadena, California

Coming of age in the patrician neighborhood of Pasadena, California during the 1960s, Rebecca Madden and her beautiful, reckless friend Alex dream of lives beyond their mothers' narrow expectations. Their struggle to define themselves against the backdrop of an American cultural revolution unites them early on, until one sweltering evening the summer before their last year of college, when a single act of betrayal changes everything. Decades later, Rebecca's haunting meditation on the past reveals the truth about that night, the years that followed, and the friendship that shaped her.

"Autobiography of Us" by Aria Beth Sloss is an achingly beautiful portrait of a decades-long bond. A rare and powerful glimpse into the lives of two women caught between repression and revolution, it casts new light on the sacrifices, struggles, victories and defeats of a generation.


Praise For Autobiography of Us…

“With surprising ease, the book plays out the friends’ complicated dynamic against a tableau of enormous changes for women, resulting in a potent story of altered expectations and thwarted dreams…A book that gains momentum with each new choice and crisis…[Autobiography of Us] blossoms in stirring and surprising ways.”  –The New York Times

"Every female friendship has a script of its own. The one playing out in this debut novel is a gripping hybrid—Beaches crossed with Who’s Afraid of Virginia Woolf." -- More Magazine

"[A] sharply imagined debut...Sloss writes with assured grace, capturing the conflicted sensibilities of a generation of women." --O, The Oprah Magazine

"A fiercely intelligent and captivating debut and an intimate portrait of female friendship, Autobiography of Us illuminates the challenges faced by an entire generation of American women." –Jennifer Vanderbes, author of Easter Island and Strangers at the Feast

"A smooth first-person narrative…The story’s hopeful end is tempered with the realization that, had the central characters been born a generation later, maybe their lives would have been better." – Publishers Weekly


"Captivating, engrossing, surprising… Sloss’ debut novel sweeps across the tumultuous events of the late 1950s through the 1980s and… celebrates the terrible struggle to find one’s identity as it elegiacally rues the necessary losses." -- Kirkus

"At its heart, the novel is a tragic elegy to spirited women in decades past who were forced to silence their dreams and desires, and whose lives were not what they might otherwise have been."-- Shelf Awareness

"In Autobiography of Us, Sloss captures not only the lives of two passionate and intelligent women but that very particular moment in American history when expectations about women and families were beginning to change—I felt Alex and Rebecca’s pains and pleasures as my own. A beautifully written and utterly captivating novel." –Margot Livesey, author of The Flight of Gemma Hardy

"Some friendships are fated, not chosen. Aria Beth Sloss's gorgeous first novel deftly and richly exposes the lasting hope as well as the inevitable wounds that come from great love. Raw and vital, Autobiography of Us leaves us marveling at the strange, beautiful architecture of redemption." –Maggie Shipstead, author of Seating Arrangements

"A masterly portrait of the lives of two indelible characters, one 'good' girl, one 'bad,' Aria Beth Sloss’s fiercely imagined Autobiography of Us is a wrenching, provocative story of thwarted friendship, ambition, and love. It marks a stunning debut from a bold new talent."—Kate Walbert, author of A Short History of Women and Our Kind

"In Aria Beth Sloss's marvelous debut novel, the passage of time brings love and pain and friendship, then reverses them all--a brilliant chronicle of women's lives in America."—Andrew Sean Greer, author of The Story of a Marriage and The Confessions of Max Tivoli

"A heartrending novel of two girls, the women they become, and the bond they forge that endures into the next generation. Aria Beth Sloss has written a lyrical and deeply moving love letter to the power of friendship."—Ellen Feldman, author of Lucy and Next to Love

Aria Beth Sloss is a graduate of Yale University and the Iowa Writers' Workshop. She is a recipient of fellowships from the Iowa Arts Foundation, the Yaddo Corporation, and the Vermont Studio Center, and her writing has appeared in "Glimmer Train," the "Harvard Review," and online at "The Paris Review" and "FiveChapters." She lives in New York City.
Loading...
or
Not Currently Available for Direct Purchase