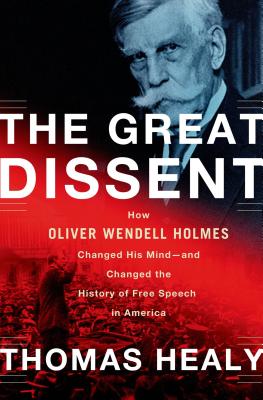 No right seems more fundamental to American public life than freedom of speech. Yet well into the twentieth century, that freedom was still an unfulfilled promise, with Americans regularly imprisoned merely for speaking out against government policies. Indeed, free speech as we know it comes less from the First Constitutional Amendment than from a most unexpected source: Supreme Court justice Oliver Wendell Holmes. A lifelong skeptic, he disdained all individual rights, including the right to express one's political views. But in 1919, it was Holmes who wrote a dissenting opinion that would become the canonical affirmation of free speech in the United States.

Why did Holmes change his mind? That question has puzzled historians for almost a century. Now, with the aid of newly discovered letters and confidential memos, law professor Thomas Healy reconstructs in vivid detail Holmes's journey from free-speech opponent to First Amendment hero. It is the story of a remarkable behind-the-scenes campaign by a group of progressives to bring a legal icon around to their way of thinking—and a deeply touching human narrative of an old man saved from loneliness and despair by a few unlikely young friends.

Beautifully written and exhaustively researched, The Great Dissent is intellectual history at its best, revealing how free debate can alter the life of a man and the legal landscape of an entire nation.
A Kirkus Reviews Best Nonfiction Book of 2013

Thomas Healy is a professor of law at Seton Hall Law School. A graduate of Columbia Law School, he clerked on the U.S. Court of Appeals for the Ninth Circuit and was a Supreme Court correspondent for The Baltimore Sun. He has written extensively about free speech, the Constitution, and the federal courts. The Great Dissent is his first book.

Praise For The Great Dissent: How Oliver Wendell Holmes Changed His Mind--and Changed the History of Free Speech in America…

“Fascinating… A magnificent book about a magnificent moment in American legal history.” —The Atlantic

“Healy tells the conversion story well, bringing the reader into Holmes's confidence and into the uneasy, war-weary milieu of 1919 America. The Great Dissent is compelling, too, for the glimpses it gives of the human Holmes rather than the Olympian public figure.... A fascinating tale-and a charming one.” —The Wall Street Journal

“The Great Dissent arrives just when its insight is needed.” —The Washington Post

“A skillfully rendered slice of history... With appreciable attention to detail, Healy gives this historical tale of jurisprudence a welcome warmth, humanizing one of the nation's critical developments.” —The Boston Globe

“Astutely describes a constellation of influences working on the 78-year-old justice-some strictly intellectual, some a reaction to the Red Scare period, some born of his deep relationships with younger comrades... In The Great Dissent, readers who care about the cherished right of free speech will learn just how it got so free.” —The Dallas Morning News

“Superb... Healy does an excellent job in bringing Holmes, a complex and fascinating man, to life, [and] masterfully guides us through related cases that the Supreme Court decided during this period.... The Great Dissent succeeds as outstanding personal, intellectual, and legal history.” —., BookPage

“Wonderful and engaging... A persuasive account... The Great Dissent should be of interest to all who care about the First Amendment and constitutional law. More generally, the book is a wonderful exploration of how justices think and arrive at their positions.” —Erwin Chemerinsky, California Lawyer

“A brilliant, extraordinary book... A first-rate and original intellectual history [that] reads like a suspenseful historical novel... One of the best books ever written about American law, on a par with classics like Gideon's Trumpet by Anthony Lewis and Simple Justice by Richard Kluger.” —New York County Lawyer

“Engrossing… An exceptional account of the development of the Constitution's most basic right, and an illuminating story of remarkable friendships, scholarly communication, and the justice who actually changed his mind.” —Kirkus Reviews (starred review)

“Healy masterfully depicts the transition from Holmes's limited view of First Amendment protections to an expansive, eloquent, and precedent-setting interpretation.… Along with clear explanations of the legal theories at play, the author provides context to Holmes's decision with informative descriptions of the historical events of the time and insightful forays into Holmes personal psychology. This is a fascinating look at how minds change, and how the world can change in turn.” —Publishers Weekly

“A beautifully written history, capturing the lively and passionate debate as Holmes came to see the abiding imperative of free speech.” —Booklist

“This is the most exciting and illuminating book on the history of the American free speech tradition I have ever read. Thomas Healy’s masterful account is a thrilling combination of intellectual detective work, gripping narrative, and psychological biography. If you’re looking for a page-turner of constitutional history, this is the book to read: with unforgettable detail, it shows how the crowning achievement of American liberty—the principle that speech can’t be banned unless it threatens imminent violence—actually emerged from Holmes’s nimble mind, skeptical temperament, broad reading, and concern for his embattled friends.” —Jeffrey Rosen, author of The Supreme Court: The Personalities and Rivalries That Defined America

“This is a gem of a book, part intellectual detective story, part judicial biography, and all composed with a flair that makes it a pleasure to read. The revelation-it is nothing less than that-of how Justice Holmes came to write the greatest First Amendment opinion in American history is worth the attention and admiration of all.” —Floyd Abrams, author of Friend of the Court: On the Front Lines with the First Amendment

“Lively and engaging... The Great Dissent takes us back to the time when a collection of great men-including Learned Hand, Felix Frankfurter, Ernst Freund, Harold Laski, and Louis Brandeis-nagged, cajoled, and eventually enlightened Oliver Wendell Holmes into writing the most eloquent and most important free speech opinion in American history.” —Geoffrey R. Stone, author of Perilous Times: Free Speech in Wartime from the Sedition Act of 1798 to the War on Terrorism

“The Great Dissent is that rare book that combines first-rate scholarship with brilliant storytelling. Bursting with intimate details and colorful characters, it brings to life the ideas underlying our First Amendment tradition. Free speech, it reminds us, does not come from the Constitution alone, but from passionate personal struggles.” —Nadine Strossen, former president of the American Civil Liberties Union and author of Defending Pornography: Free Speech, Sex, and the Fight for Women's Rights