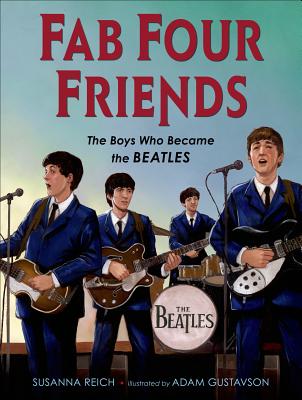 The Boys Who Became the Beatles

In 1957 in Liverpool, England, a young lad named John Lennon and his band played music at a local church fair. In the audience was Paul McCartney, who liked what he heard and soon joined the group. Paul's friend George Harrison kept showing up at rehearsals until the older boys finally let him in. Eventually they found the perfect drummer, Ringo Starr, and the perfect name: The Beatles.

Told through a lyrical text and stunning paintings, this book spotlights four ordinary boys growing up amid the rubble of postwar England who found music to be a powerful, even life-saving, force.


Praise For Fab Four Friends: The Boys Who Became the Beatles…

A Bank Street College Best Book of the Year

“[A] grand and archetypal tale . . . the closing cornucopia of Beatles books, audio, video, and websites will also help to fill in the blanks. First steps on the long and winding road.” —Kirkus Reviews

“Reich concentrates on the qualities that brought them together, focusing especially on their humor, their work ethic, and their consummate musicianship. Gustavson's luminous oil paintings capture likenesses and personalities that are utterly recognizable, even when the bandmates are just little boys and teens.” —Booklist