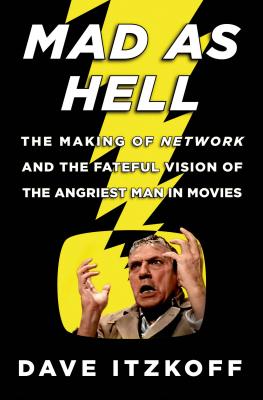 Dave Itzkoff is the author of Mad as Hell, Cocaine’s Son, and Lads. He is a culture reporter at The New York Times, where he writes regularly about film, television, theater, music, and popular culture. He previously worked at Spin, Maxim, and Details, and his work has appeared in GQ, Vanity Fair, Wired, and other publications. He lives in New York City.

Praise For Mad as Hell: The Making of Network and the Fateful Vision of the Angriest Man in Movies…

“Itzkoff's engrossing, unfolding narrative contains the perfect amount of inside-baseball moviemaking stories and anecdotes about stars. It is an inspiring, conflict-driven account of the parade of the indignities and happy accidents that are always present when making a movie, even a great one.” —Rob Lowe, The New York Times Book Review

“Absorbing and revealing ... [Mad as Hell] garners insights into what made the film enduringly provocative and riveting.” —USA Today

“Between the time the covers were glued on [Itzkoff's] lively and terrifically detailed account and this very minute, the media world has become more Chayefskyian still.... Itzkoff's narrative is thorough yet brisk as he catalogs the good and the bad that befell Chayefsky and his passion project. It is fortified with vivid anecdotes.” —The New York Times

“Dave Itzkoff's account of how the brilliant, stubborn, and pugnacious Chayefsky did his research, wrote his script and, ultimately, imposed his vision on the film is elegantly executed.... Itzkoff is right to give Paddy Chayefsky his due as a cultural icon.” —Ted Koppel, NPR All Things Considered

“Dave Itzkoff's Mad as Hell chronicles not only Chayefsky's arduous efforts to get ‘Network' made but also the influence its several messages have had…Almost 40 years after ‘Network,' we're less mad than distracted, looking to be amused. We could use another Paddy Chayefsky.” —The Washington Post

“I salute Itzkoff for zooming in at book length on Network.” —The Atlantic

“Dave Itzkoff takes us on an extraordinary journey, and in the process reveals Chayefsky's prognosis for TV, a prognosis we've chosen to ignore even as its come true before our eyes.” —Forbes

“Mad as Hell … reminds us of that era when the profession of screenwriting was revered, and some top writers could actually get a movie made… Chayefsky brought to films like Hospital and Network both anger and irony -- elements that go missing from Monuments Men.” —Variety

“In Mad as Hell, Itzkoff tells the story, lovingly and in depth, of the creation of a brilliant and important movie that would almost certainly never be made today…. Itzkoff makes a convincing argument that Chayefsky was only using the news as a metaphor to reflect the degeneracy of empathy and decency…. [Howard Beale] deserves to have his story told as deftly as Itzkoff has told it here.” —The Miami Herald

“Dave Itzkoff's book both meticulously reconstructs the making of the film and sketches, with depth and sensitivity, the complex, troubled life of its screenwriter-creator Paddy Chayefsky.” —The Daily Beast

“A terrific book by a New York Times writer about a film classic.” —The Buffalo News

“Itzkoff gives the film its due. More important, he shows just how vital one writer can be.” —Sioux City Journal

“Mad as Hell … provides an in-depth account of the making of the 1976 film that's particularly impressive because almost four decades have passed since the late screenwriter Paddy Chayefsky brought ‘Network' to the big screen… The three-ring-circus that Beale's newscast morphs into certainly resembles some of the reality shows that fill network schedules today.” —Pittsburgh Post-Gazette

“Itzkoff digs into every nook and cranny of the film's production--and also interviews contemporary television journalists such as Keith Olbermann, Bill O'Reilly and Anderson Cooper to discuss its impact…This is a very sharp and insightful book…Popular cultural history at its best.” —Shelf Awareness

“It's a joy to read and should be on the list of students of media and PR….We're all living in Paddy's world. Things won't change until we get as "mad as hell" as Network's crazed visionary Howard Beale.” —O'Dwyer's

“[A] compellingly told story of the making and cultural effect of the 1976 Hollywood satire of the TV industry [and] a solid behind-the-scenes movie book… Fans of the film will find the book irresistible.” —Kirkus Review

“Network, the satirical masterpiece that won four Academy Awards in 1976, remains a cultural touchstone…[and in Mad as Hell] Itzkoff peppers his straightforward and balanced narrative with plenty of juicy anecdotes… but Itzkoff's real achievement is in his chilling analysis of Network as prophecydemonstrating through interviews with Anderson Cooper, Stephen Colbert, Bill O'Reilly, and others that Chayefsky's satire has become our reality.” —Publishers Weekly

“Absorbing… [Chayefsky] kept a passion for the worth of the common person throughout his career, and every insult to human dignity infuriated him… A making-of film book that's also a piquant biography.” —Booklist

“Dave Itzkoff has written a sensational and definitive book about how the twentieth century's most important screenwriter came to write the twentieth century's most explosive movie. It's a loving and intelligent examination of what happens when talent and skill take common pain and anger and focus it into a magnificent work of art. I believe this is the first thing written about Paddy Chayefsky that Chayefsky would have liked. Watch Network and read this book.” —Aaron Sorkin, creator of The West Wing and The Newsroom and screenwriter of The Social Network

“Network is still a movie worth arguing about, and Dave Itzkoff shows us not just how this movie got made, but how, step by step and line by brilliant, argumentative line, it got written. This is one of the most rewarding books I've read about how a script evolves, and a tough, true and unsparing portrait of an extraordinary writer.” —Mark Harris, author of Pictures at a Revolution: Five Movies and the Birth of the New Hollywood

“Dave Itzkoff does a terrific job of bringing this signal moment in movie history to life, conveying the larger significance without losing sight of the crazy day-to-day stuff that goes into the process -- the egos, uncertainty, desire, money, and power struggles that make us love to read about movie-making. And he does it all with an intensity and passion Paddy Chayefsky would admire.” —Julie Salamon, author of The Devil's Candy and Wendy and the Lost Boys

“This is that rarest of the ‘biography of a movie' genre: the one that allows you to enjoy, in new ways you never dreamt of, the greatness of a perfect, prophetic film like Network.” —Keith Olbermann

“Dave Itzkoff's account of the making of Network, Paddy Chayefsky's prescient if mordant x-ray of network news on its way down from its postwar heights to the pabulum it is today, makes for riveting reading.” —Peter Biskind, author of Easy Riders, Raging Bulls and editor of My Lunches with Orson

“The story of Network is the story of a prophetic screenwriter and his unrelenting determination to make the film that would not only change the way we looked at television, but free us to express our anger, individually and collectively. This is more than a book about a seminal movie. It's a book about a seminal moment in American history, told with grace, force, wit, and intelligence.” —Jonathan Mahler, author of Ladies and Gentlemen, the Bronx Is Burning

“This thorough and rousing book reminds us that Paddy Chayefsky, aside from being one of the knockdown smartest individuals Hollywood has ever allowed, ranked with its most visionary. Mad As Hell makes painfully clear how our country's tabloid ethic has only worsened in the years since this Paul Revere of screenwriters saw it coming four decades ago. We should have listened.” —Sam Wasson, author of Fifth Avenue, 5 A.M.: Audrey Hepburn, Breakfast at Tiffany's, and the Dawn of the Modern Woman

“Dave Itzkoff has blessed us with a vivid and richly entertaining account of what goes on inside the making of a hit movie -- the mixture of intrigue, creativity, infighting, and astonishing behavior of the famous and the driven; all of which somehow came together to produce a superb motion picture. Not to be missed.” —Dick Cavett